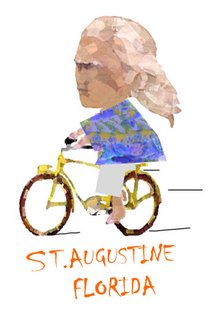 by Suvo
Here's the scenario.........I had just finished a new series of artworks that I call Floridiana. I was pleased with the electric palm trees and the vivid , saturated colors that I knew people would love to hang in their homes. I was ready to display and sell my work on Mother's Day Weekend in St. Augustine's Plaza De La Constitucion.
I was led to believe by the City Licensing office that I'm required to register my State Tax ID and purchase a permit from their office. The fee is twenty five dollars a week. Not bad, I thought. But wait ! A further reading of city Code, Section 22-10 indicates that the "sale of art" is considered a" street performance" and a permit is not required. Ok, so I'm lumped in with mimes and singing dogs, this is an even better deal.
"Not so, it doesn't say that", says the assistant City Attorney
"Let's read it together", I offer.
"Get out of my office !" says the lawyer.
Yes, admittedly City Hall is not the place to get legal advice so I go with the written Code 22-10 and forego any permit. No one can deny the written word can they? Can they? Read on.
The display looks great. The black draped table with an easel on either side was simplicity itself. I had a two page list of City rules and complied by filling my flower vase with (yup, flowers.... C'mon.. it was Mother's Day)"private" water since the rules did not permit us to use the City water faucets.
Uh oh! Here comes a policeman! He looks to be about twenty five years old, with a shaved head and a serious expression. He passes the other vendors and heads straight towards me.
"Do you have a permit?, asks the officer.
"No, Do I need one ?", I say
"I'm giving you a one hundred dollar ticket and you gotta get this stuff outta here right now", he waves his hand toward my display.
"Can we hold off until I go one block to City Hall to straighten this out?", I ask.
He says into his handheld radio. "I need backup here at the Plaza...NOW"
"Hey wait, I'm not being obstinate, I just need clarification on Section 22-10" . I'm whining a little here.
Voice raised a bit, "You got an attitude. If you leave we will confiscate your art, arrest you and impound your dog. There'll be a hefty fee gettin' em back".
Oh Jeez ! Arrest me? Arrest my innocent dog Karl? Hold my art hostage? I relent and try to comply with the five minutes allotted time to clear out. Now we have two police officer clones with shaved skulls and furrowed brow overseeing my evacuation. I'm amazed that after setting up for forty five minutes I have everything crammed back in to the Cadillac within the five minutes given. There is no prize.
I have nine broken panes of glass , one bent frame and I am out of business for the weekend. I'm happy that Mother's Day weekend was a financial sucess for my vendor friends. I wish I coulda been there guys.
U.S. Federal Courts have always permitted art sales on public property. A license or fee cannot be charged. It is a prime First Amendment directive. We do not pay for First Amendment protection. The City of St. Augustine's Code 22-10 inexplicably goes even further by stating that craftspersons and the creation /or sale of goods handmade or otherwise (?) can be done without permit.
A coffee shop conversation a few days later :
"Hey! I seen you downtown. I work downtown too! ", says this rough looking, blue haired, mohawked, multipierced, prison tattooed kid.
"Really, What kind of work do you do?", I ask
"I'm a sign flyer", he says
" A sign flyer ? ". I have no idea.
"You know", He pulls out a corrugated cardboard scrap with the words... Homeless -
Need Money ..scrawled with a marker
"You can do this here?", I ask incredulously.
"Yeah, I went up to City Hall and they told me that I didn't need a permit or nothin' but I can't be aggressivelike and I gotta stay off St. George Street. Mother's Day was f@&%ing great man! How'd you do?"
I'm told that St. Augustine is near the latitude of Egypt's Great Pyramids and is considered to be an "energy vortex" by some. Maybe somewhere in the universe there is a "Mondo World" where up is down,might is right, and rights are called privileges. Some artists in the oldest park in America may suspect that this place is here in St. Augustine.

It is written in the City Hall files that I cannot sell my art in any St. Augustine public place until May of 2007.