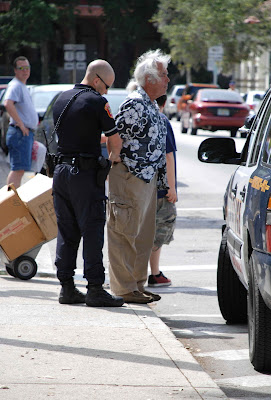 Update 4-10 at end of Article
Last Saturday a cadre of armed uniformed St. Augustine Police swept through the Plaza threatening arrest of three artists if they did not pack up and leave the area. Why? The officers had a list of "approved"* visual art items and those vendors cited did not use traditional materials stated in city code. Suvo had previously sent a memo to the City attorney regarding the legitimacy of leather sculpture and tapestry as fully protected First Amendment art. The two city attorneys do not deign to respond to the street artists. Too bad. They could use a good lesson on the first Amendment and another primary lesson on art. Contrary to Mcluhan's maxim, the medium is irrelevant here but it is the message that the artist conveys. These are fully protected artworks under the First Amendment.

Since the artists in question felt intimidated and stopped their display,Suvo decided to display Sala's supposedly banned art amongst his own. He was hadcuffed, his dog Karl was taken in one vehicle, his art in another and he was sent to the St. John's County Jail at 2pm Saturday 3/31. Bond was set and posted the next morning and paid at 2pm, though he was not released until 7:30 PM Sunday night . He missed one of the nicest weekends of the year.Karl was sprung at noon on Monday. The caretakers at animal control say that he was not a happy dog. At 14 he has rarely been away from the side of his master ( he was a certified sevice dog for Parkinson's patients) No one knows where Suvo's art is at this time.

Readers of this blog from other cities and towns.............Where you live,do the police harass citizens in this fashion? We are at a loss as to why they do this to the local artists. We do not make much money (and we pay tax) so the local merchants bottom line cannot be affected by our presence.

To The City......From tourism point of view how do you feel about the fact that the tourists are watching this .........yes we will say it........ Nazi behaviour? Is there any concern that there will be another Celli vs St. Augustine case. This case is cited nationwide by law students when free speech issues arise. The city appeared ridiculously backward on the Gay Pride flag issue.It seems to be policy to violate citizens rights and pay a little bit when they sue. This pattern is noticed by others in the judicial field.

Suvo was asked to go to a recent city council meeting recently to express our concern over harassment. Not particularly eloquent or verbose that evening ( he was feverish and not well at all) he did ask the city to "Just stop it". It did not work and the police have dropped all semblance of civility, referring to a list* that they would not show us. We did see that "Barbie Dolls" is on the list of non approved art. For this, you have two full time attorneys in a town of 13000?

Taking an old man's thirteen year old dog............... confiscating art, handcuffing artists......SHAME ON YOU! City Commissioners , why do you permit this behaviour? Most of you have visited with us and bought art from us. Is this the City you want?
*Update: Judy in the licensing department was very nice and stated today that she knows of no list but is aware that works must be on paper or canvas but sculpture is ok as long as it is "clay sculpture". We asked if stone , glass, or bronze would be approved but Judy said "No, you can only sell sculpture that is made of clay if you want to sell in the Plaza."
Official Comment From City Hall
"Regarding the blog, I am not familiar with it and could not pull it up when I tried yesterday. It does not matter though because I (nor anyone else at city hall) would respond to what is stated on a blog. A blog that could be (I haven't seen it) filled with inaccurate information......... It is a blog, the opinion of others and I have no response on what others have written about the City of St. Augustine."
Kathy DuPont ,Neighborhood Coordinator,Dept. of Public Affairs City of St. Augustine
All we can say,Ms. Dupont,is that you are on our mailing list and someone using your console has been reading Art In The Market. -Karl
Posted by Karl at 5:22 PM