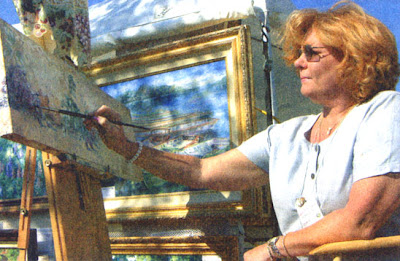 Last weekend the Plaza de la Constitucion was visited by well known artist Kimberly Erb who is on tour. Kimberly filled in a blank calendar weekend with an exhibit in our Plaza with the other artists. Click on to her website at the end of this article. You will see beautiful oils combining imagination and training with emphasis on color, light source and composition .

Kimberly is former Chairperson of Ohio's 18th U.S. Congressional District Art Competition, an honor she's held from 1995 to 2000. She's also judged many other competitions in the Northeast Ohio area. The popularity of Kimberly's oils began in Northeast Ohio and has steadily grown to reach both coasts in the United States, in addition to Canada and several European countries

We are happy that the Erbs did not witness the police harassment of artists that has occurred in previous weeks and hope that we see them again on one of their tours. http://www.kimberlyerb.com/