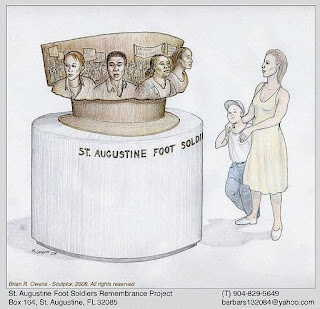 The Plaza de la Constitucion will now have a memorial to honor the "foot soldiers" who fought for the Civil Rights Act of 1964. The monument, sculpted by Brian Owens of Deltona, will be a bronze plaque, weighing about 650 pounds, placed atop a concrete pedestal. It will be 6 feet tall.

The Foot Soldiers Remembrance Project is a 501 (c)(3) nonprofit organization founded to publicize and promote the heritage and contributions of African-Americans in the City of St. Augustine, and St. Johns County, with particular emphasis on the civil rights "foot soldiers" whose brave struggle for justice helped pass the Civil Rights Act of 1964, and in whose honor the Project intends to erect the memorial Full Story
Posted by Karl at 5:48 PM