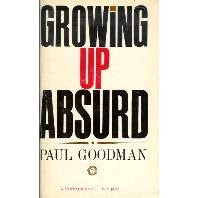 One of the banned books

“When a village ceases to be a community, it becomes oppressive in its narrow conformity. So one becomes an individual and migrates to the city. There, finding others like-minded, one re-establishes a village community. Nowadays only New Yorkers are yokels.” Paul Goodman 1911-1972

Last Saturday Suvo was the only artist displaying artwork in the Plaza. As a demonstration of First Amendment Rights, an eight foot wide bookstand was set up offering for sale art, political, philosophical and history books and magazines. Art In The Market hoped to raise some funds to help pay for our legal defense. After the officer assigned to watch him (overtime at 30 dollars an hour) checked out. Two bicycle cops approached and cited Suvo 100 dollars for offering "goods" for sale in the Plaza. He was told that the new policy was no longer to send the "vendor" packing or to jail but to permit continuing the "offensive"activity after a ticket is issued. "One ticket a day and you can continue what you are doing". Suvo was relieved that he and his dog Karl did not have to spend the night in jail again. This time the police did not confiscate his art and the protest signs and flyers were left undisturbed. Perhaps our city administration has decided to evolve from totalitarian to benevolently autocratic. No books or magazines were purchased (tourists and locals bought the funny posters) after eight hours but Suvo saw lots of five dollar ice cream cones walking past.

Magazines: Smithsonian Magazine - Art in America - ArtNews - Art Forum
A sample of Books : Good Dog Carl by Alexandra Day- Growing Up Absurd by Paul Goodman - Empire by Gore Vidal- The Giving Tree by Shel Silverstein - The Jesus Plot by Stanley Holzer, The Bible by various authors - The Way of the Buddha by Thurman- In His Own Write by John Lennon and a number of others .

Posters with caricatures of the city commission

The First Amendment does not apply in the nation's oldest public space. One minor success......we can display and sell our art or books as long as we pay the city $100.00 a day.