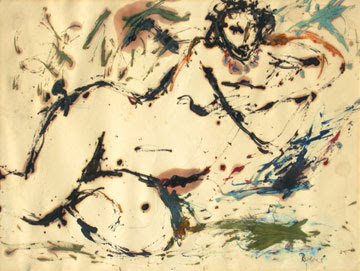 LARRY RIVERS Portrait of Bertie Oil on paper, 1951 17.5 x 23 inches
Vered Inventory
Finally a gallery owner gets it ! Sell overpriced art, give the people jug wine, salty canned shrimps on Ritz crackers and one day karmatic justice may catch up with you. In the Hamptons the world is topsy turvy. The swells get busted. Listen to the opening "Like,Oh My God!" Girl talking about "stripping her Patagonia "and "going Stella McCartney" (meaning, it's summer now) View the film here Hey SAPD, how'd ya like to deal with shrieking Ruth compared with our own Suvo? Someone who knows told us that this was a "set up" and it is confirmed when schlocky "events manipulator" R. Couri Hay is seen briefly at the end of the tape jokingly trying to raise bail five dollars at a time.Sales are way down. Find a cheap way to get national publicity. Exploit a rarely enforced town ordinance by making an anonymous complaint to the police. Major papers covered the story and were just as conned as the police. Our friend told us that Ruth was "too calm" and that if this was a surprise bust she would claw kick and really go Zsa Zsa on em .She would be even ..........shriekier? Yet oddly, her facial expression never changes....can't.
Note: look at the guy watching the cops take away the wine........we think that he also shows up at our Art Walks and he looks familiar to our Sarasota friends too. It may be cheap wine but it's still....free.
05-26) 15:13 PDT East Hampton, N.Y. (AP) --

An East Hampton art gallery owner was led away in handcuffs Saturday after she refused to stop serving drinks at an opening bash for a celebrity photo exhibit. As about 200 startled guests looked on, Ruth Kalb — generally known as Ruth Vered, after her gallery's name — was arrested on a charge of selling alcohol without a liquor license.
"I told them I've been doing this since before they were born," said Vered, 67, whose gallery has been a fixture of the Hamptons art scene for more than 30 years. "They have some nerve."
She said the wine and Champagne were free.
Mayor Paul Rickenbach said police were just doing their job.
"It's not something that's new and out of the blue at all," he said.
Vered was throwing the party — during the traditional Memorial Day weekend start of the resort's summer season — to celebrate an exhibit of photographs of Madonna, Justin Timberlake, Angelina Jolie and other stars.
Vered is due to be arraigned June 25 in East Hampton Town Court.
Karl's note: Eisensteadt, Ansel Adams, Madonna and Justin........notable icons of high art photography.........Jeesh! And I'm up there with Rin Tin Tin and White Fang.
Posted by Karl at 5:52 PM