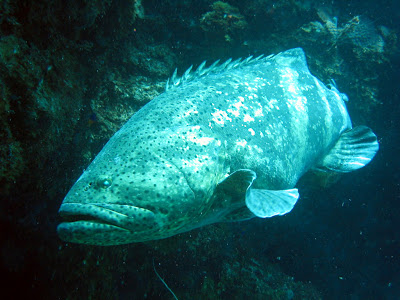 For a kid in the Midwest, seafood was a square of Mrs Paul's fried fish or Gorton's fish sticks. What kind of fish? Waddya mean? It was fish and it tasted kinda like fish! Sometimes the local church would have a fish fry and cartons of frozen perch or cod fillets would be deep fried and the phony sophisticates amongst us would ask for lemon wedges instead of the catchup bottle. Later we discovered iodine tasting fantail shrimps served at our "good restaurant". Occasionally though we would have fisherman friends bring freshwater perch , bass or trout but as a kid we liked the crispy fried "mystery fish" from Mrs. Paul's or Mc Donalds.

As years passed we discovered fish like Dolphin, Tuna, Pompano, Snapper and Grouper. The last one being kind of the "sandwich favorite". Nothing fancy. just a good fairly dense white meat fish that didn't hold too much oil when deep fried . Beware ow of the following story from today's San Francisco Chronicle. It starts like this :

.Madeira Beach , Fla. -- What the undercover agents ordered, over and over, was the grouper.
What wound up on their plates could stifle anyone's appetite.
The alleged grouper at 17 of 24 local restaurants sampled by the investigators was actually another, less desirable species, according to a DNA analysis conducted for the state attorney general's office and released this month. Asian catfish. Emperor. Painted sweetlips. And twice, types of fish that could not be identified. Continued Here
Posted by Karl at 12:53 PM