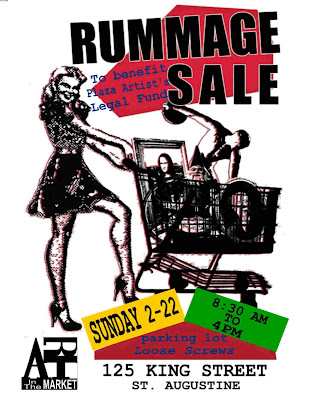 The small group of artists who have been illegally exiled from public spaces in downtown St. Augustine can only be described as a textbook example of a "grassroots"organization sometimes referred to amongst ourselves as Art In The Market but more often we are referred to by locals as Plaza Artists in reference to the Plaza de la Constitucion which can be called the nation's first (1573) public space.


We are fighting back with limited resources. Our losses in County and Circuit Courts have only reaffirmed our zeal to have the Federal Courts here recognize what Federal courts elsewhere has recognized., that visual art has full Constitutional protection and display & sale on public property is a right guaranteed.

This is an expensive battle both in time and money. The City of St.Augustine taps into it's 50 million dollar annual budget to pay outside attorneys, overtime undercover police, court time and jailers to prosecute us. We refuse to be victims and have been preparing to be plaintiffs in The Federal court against the administrators of The City of St. Augustine. Unfortunately there appears to be a "shadow government" of businessmen who instruct the city servants to use taxpayer funds to seemingly protect their own interests against what they perceive is a threat to them......that's us.....the artists. Citizens do not want this. We are certain that citizens do not want their hundreds of thousands of dollars fighting a resolute group of artists.

We are raising money to pay for the preliminary fees to get into Federal Court. The case is ready now and we need to file it. Garage sales are more successful than art sales so we are having one. If you have "rummage" to donate call 904-315-2563 or e mail plazanews@mail.com and maybe that will help us.
Posted by Karl at 11:25 AM