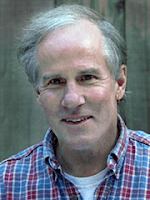 Protest letters are pouring in to The Provost of the University of North Carolina at Wilmington over his recent action - but he's keeping them quiet.
A short time ago, he banned 14 photos in The Century Project by Frank Cordelle. The Project is an exhibition of nude photographic portraits of diverse girls and women, plus their personal statements. The University administration has refused to discuss the severe censorship, an action the Project had never encountered in its 27-year history.
If you are offended by the female nude figure (you know who you are) do not go here for a sample of the exhibit that has traveled worldwide.
Cordelle Pictured
The primary goal of The Century Project is to provide, through art, a healthy alternative to the way in which women are represented in the media. The Century Project is about real women in real bodies, not the caricatures in the worlds of media and advertising.