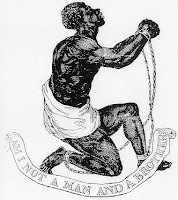 In our city of St. Augustine we have groups of reenactors who portray early American colonials in various historical time frames. We also have ersatz "pirates" and their wenches doing the Johnny Depp thing.

The National Park service has put out the word that they are in need of two people to portray slaves. They have even given them names ,Domingo and Anna. We've talked with some reenactors and they've told us that they do not understand why they cannot find anyone to fill these parts. Really?

The other reenactors get to wear these fantastic tri corner hats, boots and marvelous coats with brass buttons. They shoot cannons and brandish swords and get to say things like, "Ye English Protestant dogs must DIE!" We don't know what the slaves will be wearing.

Maybe I'm wrong, but the slave role, while not elaborated in the call out,doesn't seem to be a role that anyone would  want compared to the other cool costumed parts."We wouldn't ask them to do anything undignified " said one reenactor, who will remain unnamed. That is a relief .Many of our African American residents are children of the civil rights advocates of the contentious 60's here in St.Augustine. "I can imagine a 70year old civil rights veteran saying to his offspring, "You're dressing up like a WHAT?!"

We are told that it's an important role in historical portrayal. Maybe so. Years ago I had dinner at an Atlanta restaurant called "Pittypat's Porch". An elegant older black man approached our table wearing a chalkboard strapped over his neck. This gentlemen proceeded to do a soft shoe dance while quoting the evening specials in a servile singsong dialect. It was  embarrassing as hell. We didn't know where to look cause we didn't want to see this person, old enough to be our father, portraying a "house slave".

To those who might not understand why someone would not want to voluntarily portray a slave (an unpaid position naturally) we say go ahead and do it yourself with black face makeup. It might work. Don't wanna do it? OK, now you get it.
Posted by Karl at 11:46 AM