An Elizabethan View of the New World 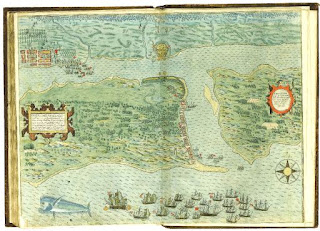 An historic copy of the first printed atlas of England and Wales, a landmark in Elizabethan cartography, is coming on to the market for the first time in 200 years.Among the collection is an illustration of Sir Francis Drake’s famous expedition to the West Indies and America from 1585 to 1586, when he set out to attack the Spanish possessions there.This set of charts, depicting towns “visited” by Drake’s fleet, are of particular importance because they gave Elizabethan England the first glimpse of America. Among the charts is a view of St Augustine in northern Florida — the earliest printed view of any city in North America. More Here

* Post script: An anonymous bid of $1.29M won this chart and four others at the Sotheby's London auction.