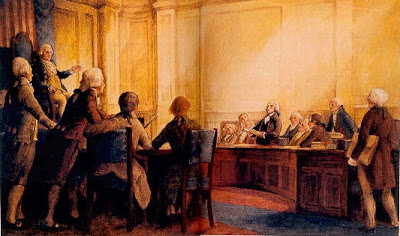 St. Augustine Artists Plan to Defy City
Edict Requiring Them to Get Permits.

ST. AUGUSTINE, FL, USA – In response to the commission’s 4 to 1 vote on Monday to ban all visual artists from the city park and reinstate a vendor permitting scheme requiring a permit to sell in the Plaza de la Constitucion, the oldest city park in the United States of America, 10 visual artists who normally sell their artwork in the city park without a permit delivered a proclamation to City Hall today.

The Proclamation states that the artists believe the City would be “flagrantly” violating their civil rights if they are harassed, cited, or arrested by the City for not having a permit to sell their artwork in the park.

Assistant City Attorney, Robin Upchurch, recognized publicly at the City Commission meeting on Monday, that a recent court ruling by St. Johns County Judge Charles Tinlin regarding the city’s ordinance 22-06 which requires a permit to sell in the park, was unconstitutionally applied to three artists who were recently cited and arrested in the park, and that it violated the artists’ First and Fourteenth Amendment rights.

In his ruling, Judge Tinlin cited “Bery v. New York,” a United States District Court of Appeals decision that states it is “unconstitutional” to require visual artists to get a license to sell their artwork. The Federal Court ruling declared that visual art is “protected material” under the First Amendment of the U.S. Constitution, and that the artist’s act of selling their artwork is equally “protected conduct” under the First Amendment.

The visual artists claim that the City initially recognized the Federal Court ruling protecting their First Amendment rights to sell their artwork without a permit last year when they refunded several thousand dollars in permitting fees in September of 2006 (see image of letter attached). However, by reinstating the policy on Monday to require all artists to get a permit, the artists claim that the City is flagrantly violating their civil rights.

Greg Travous, one of the artists who normally sells his artwork in the park without a permit stated, “It is not the artists, but the City, it is the City who is breaking the law here. City ordinances can, within reason, regulate the time, place and manner that artists may sell their artwork in public spaces However requiring an artist to buy a license has been ruled unconstitutional by the Federal Courts. And it is the City of St. Augustine who is wantonly breaking the law here by disregarding the Federal Court ruling.”

On Monday, October 22, the St. Augustine City Commission voted 4 to 1 in favor of a new ordinance banning artists from the city park. The new ordinance #2007-23 will not go into affect unless city commissioners vote to approve it during a special meeting to be held on November 13, 2007.

Following the vote to ban the artists from the Plaza, city commissioners voted on a summary motion to reinstate a policy between now and the final reading on November 13, making it mandatory that all visual artists and commercial vendors alike purchase a permit to sell in the Plaza.

The number of permits to be issued will be unlimited, however the commission voted to reduce the number of available spaces from 25 to 15. As one commissioner put it, “let them fight over” the spaces. The spaces are available on a first-come, first-serve basis.

By reinstating the policy, the city commission disregarded a Federal Court decision that makes it unconstitutional to require an artist to get a license, and voted to make it mandatory that all artists apply for, and purchase, a permit to sell their constitutionally protected artwork in the city park, alongside commercial vendors.

Commercial merchandise that has a predominantly utilitarian purpose does not have the same First Amendment protection as an artists’ artwork which is primarily an _expression of the artists’ ideas and concepts.
Posted by Karl at 10:06 AM