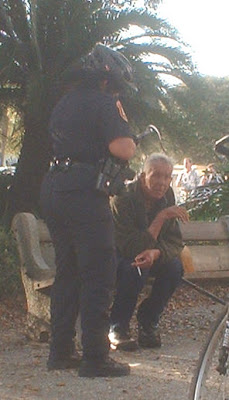 When tourists or residents complained about the "bums" in the Plaza it was many times in reference to John Lynch. Whatever sent Mr. Lynch on the road to broken down alcoholism, we'll never know. He was usually in an extremely foul mood. Life had battered him apparently and he escaped into the bottle. He had over 32 citations and a number of incarcerations from" open container" violations to aggravated battery(drunken disputes).
If anyone took the time to talk with John they would find that it wasn't easy to make friends with him, but eventually you could get him to smile at a joke or express thanks for the donut or whatever. He had eyes that were a striking blue when not bloodshot. If he had been dry for awhile (jail time) his appearance changed to a tall ,distinguished ,white haired 63 year old gent who could be mistaken for the head of the Rotary. This change was brief, until he got a hold on another bottle
Mr. Lynch had a rough year . His favorite bench was made off limits when he got out of the slammer the last time. He was incontinent and his legs stopped working , so he had been assigned a wheelchair on his last hospital/jail incarceration. The local cops were amazed at his durability. The last time that I saw him, his wheelchair was parked next to the Cathedral on St. George. I bought him a pizza slice and asked him if he was ok. "Goddamn legs won't work anymore!" he barked. I said, "You sound like your old self, you grumpy bastard". He grinned and went about eating the pizza. "Can you get me a goddamn beer? I considered it for a moment but then told him, "I can't John".
I found out that Mr. Lynch's body finally gave out and he died recently. I thought about the speech to the troops from the film "Gladiator".
"If you find yourself alone, riding in green fields with the sun on your face, do not be troubled for you are in Elysium and you are already dead."
.......Enjoy the green fields and the sun on your face, John.
Posted by Karl at 7:44 AM