Next Show In One Half Hour 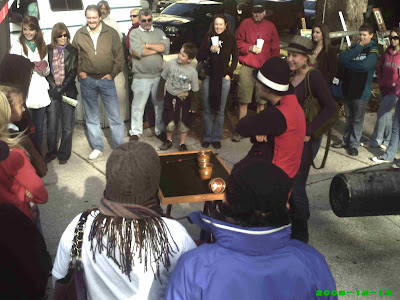 Ok follow me here..........Visual artists are characterized in Federal Court affidavits and oral argument that we cause disruption to the flow of pedestrians, creating a safety hazard. Frankly, if it were popular artist Peter Max set up in the Plaza we can assure you that the general public would not "flock" around artworks as they would a musician or street performer.
Ordinance 22-6 states "It is unlawful for any person to sell or offer for sale, compensation or donation, or rent or offer for rent, goods, wares, merchandise, food stuffs, refreshments, or other kinds of property or services upon the streets, alleys, sidewalks, parks and other public places within historic preservation zoning districts HP-2 and HP-3."
Each time Suvo was arrested and jailed ( not for selling ,but simply 'offering for sale') he pointed out as he is led away in handcuffs that the musicians and street performers right next to him had their hat or guitar cases out collecting money. This falls on deaf ears all around.
We visual artists have been banned from the historic district. Yes, we are told that Constitutionally we can display but not take money. What happened to the health and safety aspect if we CAN display only? Dunno? We apparently become a hazard as soon as we say "that's 15 dollars, sir".
In the recent photo above, a magician is performing at Cathedral and St. George Street. Note all of the people completely blocking access to the only sidewalk there that leads into the Plaza. After his act he passes his derby around and waits another half hour to gather a similar crowd. Entertaining and colorful ....yes .Constitutional Right? Who said so?
The question is...why are visual artists who produce constitutionally protected art, banished from the entire historic districts HP1 and HP2 while performers can do their thing throughout the districts with the exception of a five block area on St. George Street?
Does it appear to you that visual artists are being singled out? Is it coincidence that a wealthy gallery owner has four galleries surrounding the Plaza de la Constutucion? His sales consultants appear to take their prospects from gallery to gallery crossing the Plaza . They can now do so without worrying about their client's wandering eyes.
The gallery owner is protected by a circle of golf playin cronies in City Hall .So far they have prevailed. The Golden Rule.......he that has the gold........ Put these guys in their place!
The City of St. Augustine's accusations against painters.. link HERE
Please note that merchandise vendors have been banned for over two years
Also notice that the word artist is never used in the affidavit language.
Some of the incidences described go back to the year 1990!
By the way. If you plug into a city outlet to make a phone call on your depleted cell phone......it'll
cost you 200 dollars...........at least if you are an artist. I used to get my waterbowl filled at the faucet at The Government House but this scared Suvo off and now I drink two dollar Evian . Tastes the same!
Posted by Karl at 9:04 PM