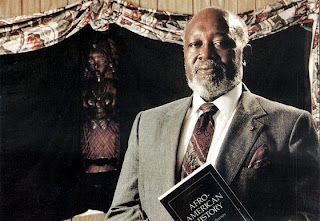 James Nathaniel Eaton ..Florida Agricultural and Mechanical University
At the ciy's last Commission meeting Mayor Boles filled in facts regarding the formation of a national committee for the city's upcoming 450th anniversary. The esteemed and accomplished Dr. Eaton has been formally asked to be listed on the board. No reponse has been received and frankly we would be taken aback if Dr. Eaton would respond as he has been deceased for the past six years.

This is an example of the unenlightened attitude that goes like this. "We need a black face on the board and General Colin Powell has turned us down . Don't know this guy, but our black Republican Erroll Jones says he's a good choice.( Commissioner Jones is a graduate of Dr. Eaton's school)...... so send out the invite."

We still think that famous Spanish femme, Charo (Coochie, Coochie) would be a good fit and will probably accept a business class plane ticket to Jacksonville if they can find someone to pick her up there. We are told that she is very much alive.
Posted by Karl at 10:51 AM