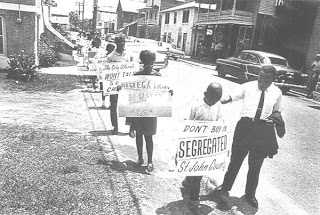 Dr. King in St. Augustine, 1964
Martin Luther King Jr. was jailed here during the 1964 civil rights demonstrations. He was charged with trespass and contributing to the delinquency of a minor, like the kid in the photo, standing up for his rights and his family's rights.
It was during that time that the St. Augustine City Commission and Mayor Shelley removed all public water fountains and passed this ordinance:
Sec. 22-4. Parks; holding public meetings.
It shall be unlawful for any person to hold any public meeting of any character whatsoever in any of the parks of the city without permission of the city manager.

This "law" is still on the books. The artists (at least one) will be meeting in the Plaza soon. The public is invited. We have not asked for "permission".
Posted by Karl at 10:42 PM