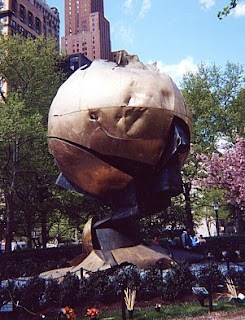 I once had a girlfriend whose birthday was on Pearl Harbor Day December 7 when, in 1941, over 1200 Americans died out there in the middle of the Pacific Ocean. I could always recall her birthday by this event. My birthday is on 9-11 and yes, I believe that more of my friends now remember my date of birth because of the horrendous event of 9-11-01.
As years pass and Pearl Harbor survivors reach old age start we tend to think of the attack on Pearl Harbor in the abstract, as just another date in the history books.The September 11 2001 attack on the World Trade Center has taken it's place as the touchstone example of physical foreign intrusion on our nation. Over 2900 lives ended on that spot, on that day. We all were changed by that event. One day it will be another date in the history books but not for awhile.
We all remember where we were when we heard about this terrorist act. Live TV coverage put us there as it was happening. The whole east coast of the U.S. was cloudless and  beautiful blue skies was the rule. If the day was overcast and cloudy, history may have recorded another different  unthinkable happening (shudder)....a large jet skidding into the midst of 6th Avenue. These were not well trained seasoned pilots.
On September 11, 2001 I had recently returned to my hometown after a 26 year absence. My father's health was failing and I was the only one of the family who could devote time to ease him into what was most likely, imminent death ( it turned out that dad spent four more years with his Parkinson's Disease) Feeling like a stranger in my hometown , I was grateful when my youngest sister invited me for a birthday lunch in St. Louis, 20 minutes away by light rail. My father was still ambulatory and could be left alone. After an hour of watching the television coverage of the Twin Towers falling, I recalled my time in New York City. The plaza between the two Towers was one of my favorite people watching spots. On a clear September day I might be found sitting in the plaza near Fritz Koenig's sculpture "The Sphere," with  a brown bag lunch from Balducci's. This was what was later referred to as "Ground Zero".
Taking the train into St. Louis, all passenger conversations were regarding the N.Y.C. terrorist attack. I almost teared up as one woman told her that she heard that over 12,000 people were dead. I knew that the Trade Center certainly held that many people and more. The lady said this so "matter of factly" as if she were recounting the score of a Cardinals game. At lunch with my sister, in a popular midtown restaurant/bar, all eyes were on the large screen television (especially brought in?) St. Louis is a long way from N.Y.C. but there was a tangible feeling of  anger and pain in the comments around our table. I do not recall any of the lighthearted laughter that you would find in a lunchtime crowd. After lunch, my sister had to return to her job at nearby Washington University and I walked to the St. Louis Art Museum. The museum was closed for "security reasons". The trains were still running and I returned to my father's apartment.
I remember a man from the former Soviet Union who set up his vendor's cart in the world Trade Center Plaza selling  those little hollow wooden dolls (matryoshkas) that nested inside each other. He was the epitome of the American Dream. Ivan was almost 70 and loved America and had a house in Queens. He told me of his time in the Gulag during the Khruschev era. I never asked him why he was punished, it seemed rude to do so. He would've been setting up his stand at 8 am that morning and I realized that he would be a survivor since he was at ground level and the buildings did not fall right away. I remembered a visit to the Trade Center three years prior to the terrorism. I was looking for an acquaintance on the 40th floor.He worked in a brokerage house. Not only did I find the whole floor of offices empty, I wandered through the eiree atmosphere, scraps of memos and old phonebooks littered the floor that sprouted spaghetti like electrical lines where the desks were formerly located. Out of business...gone and abandoned . The bedroom sized elevator still stopped at that floor returning me to ground level.
From my apartment on River Street in Hoboken across the Hudson River, I could see Manhattan Island as a shimmering diorama with the  Empire State building in the middle and the Twin Towers at the ocean end on the right. Not having lived there before the Towers were erected, it was to me, a symbol of that great wonderful metropolis. A year after the terrorist attack I returned on a visit and stood on the New Jersey bank of the Hudson and saw.....a blank spot where the towers were. Crossing over by ferry I was astonished to see an old friend.......a survivor of the calamity. Crushed, bruised and relocated ,I found the "The Sphere"  in Battery Park. Bouquets of flowers were placed around the metal artwork and handwritten notes to lost loved ones were pinned to the greenery. A welder was inside the ball working to repair only some of the damage with most of the dents and dings remaining as a memory of the disaster. His welding torch made sparks come out of the holes in the big metal ball.
It was then...a year after the catastrophe that I cried a little, there on a park bench.
Further reading  "Holy Places": the World Trade Center as a Mythic Place