Not All Art Is Protected Speech 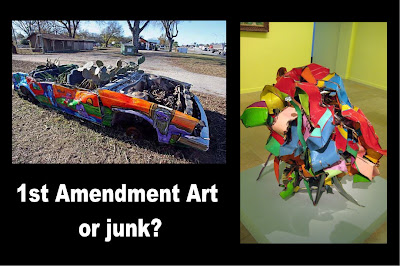 Kleinman vs The City of San Marcos
Link
The photos above illustrate the fine line that the Federal Courts must decide in expressive First Amendment art cases. On the left is a dented and beat up 1988 Oldsmobile (remember those monsters?) transformed into a decorated cactus planter. It was ordered removed from view by the city of San Marco,Texas.On the right is renowned artist John Chamberlain's crushed car body sculpture valued at 20 million dollars.

After losing in the lower courts, the owner of the Oldsmobile appealed to the Supreme Court who declined to hear the case, leaving the appeals court decision standing. This case has relevance to us here in St. Augustine since a county judge had ruled in the artist's favor a few years back, that first amendment protected "art" may be in media other than pigment on paper or canvas. This seems like an obvious conclusion and the artist's here in St. Augustine should never have been arrested, jailed and taken to court over such a basic issue.

The wrecked Oldsmobile is certainly "art", but is it protected by the U.S. Constitution's first amendment? A previous Federal ruling stated that there must be a defining line between the utilitarian and the purely expressive.This decision is a delicate one that sits on a precarious see saw with one side being the "use" and the other side being  "expressive value". A flea market toaster is not purely expressive if a rose decal is affixed. And contrary to City Attorney Brown's opinion that t shirts with expressive pictures on it is protected, it is not, unless that message is political or religious. Is Duchamp's R. Mutt signed  urinal protected speech? Duchamp's "ready made" art was making a statement (we will not dissect that here) and no....the porcelin urinal lying on it's side atop a pedestal was not meant to be utilized (you can get thrown out of the museum for that!).

You say, "Well ,that Oldsmobile cannot be driven and it has paintings all over it". Good point! This was most likely an issue that was brought up by the appellant artist in the San Marco case. Here is an interesting, albeit erroneous statement by the City's attorneys . They said that past first amendment  cases "expressly protects only great works of art that are primarily, if not solely, expressive in nature." In reality, the lawyers in Texas need to learn (and this was the artist's strongest argument) that  "non great" or even downright bad art is protected equally. But the decision hinged more on the expressive vs. utilitarian. The creator of the art/planter might have fared better if he left out the cacti. The court decided that the utilitarian nature meant that it was not "solely expressive" as a painting on canvas would be. John Chamberlain's metal car part sculpture has no "use" other than as an artistic display. Since the Supreme Court declined to review this decision, The decision means that the planter /art may be removed as ordered by the city.
Posted by Karl at 7:46 AM