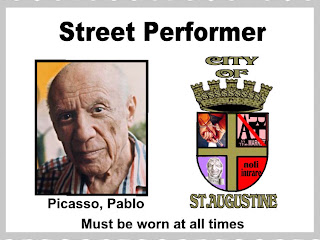 The other day I had a conversation with a contender in the upcoming City Commission race. He had taken an informal survey of citizens and merchants regarding their attitude towards art vendors and street musicians.Here at Art In The Market we have little discussed the street musician issue since there is a different set of Constitutional laws regarding the ability of governments to control and restrict their activity. This has mostly to do with intrusive noise. That said, contrary to what some think, we street artists enjoy street musicians and wish them well in any attempts to stand up for their rights. We visual artists simply cannot take them to court with us since our case cites previous decisions involving visual speech (art).

The City Commission candidate brought up some points that we sometimes miss being so myopic regarding our own cause. Much of it has to do with the economics of our enterprise. Amongst the artists we have always agreed not to discuss money with "outsiders" (the press, the police, the politicians etc.) Here we will dispense with that for illustrative purposes.The discussion is paraphrased below.

Can the artists work out an arrangement with galleries? Yes, galleries are always looking for new artists and inventory but consider this...As an artist who sells our work on public property we feel that not only  is this the best way for others to see our work but it is also, and many won't understand, a philosophy that this outdoor vending is also part of the message. Those who would never consider going into an art gallery will see our work. Our artworks are affordable and many times, particularly in a younger person's case, this would be the first time they have bought art for themselves.

We have many galleries in town and they serve a purpose, but frankly, very few local artists will be found in the high traffic art galleries. The cooperative galleries tend to be physically removed to affordable rent areas. A working artist cannot hope to sell enough to keep body and soul together much less recover the cost of producing artworks.Our profit margins are slim and paying commission to a floor salesman and the gallery would be prohibitive.

Would the artists accept an application/permit process if there was no cost involved? No, other than our sales tax license that permits us to collect state sales tax. This is a point that we cannot stress enough. A fee is a tax and the Federal courts have ruled that you cannot tax First Amendment activity.Visual art is symbolic speech. The very term "permit" implies that it can be withheld or withdrawn. The courts have also held this to be a "prior restraint". In other words, asking permission to express your ideas is anathema to our U.S. Constitution. Being photographed and forced to wear a badge identifying the artist as a "Street Performer" is laughable at the least. The current permit process is changed and interpreted at whim by the clerks in the City Finance office. For instance there is a 3.5 hour window when you must get to the office to pay for your licence if you are lucky enough to win in a lottery held on the 20th of every month. You cannot call on the phone to find out if you have "won" but must physically go to the office. The fee that is annualized to 900 dollars a year is by far the highest price fee in the country coming in first over Key West's 200 dollar annual fee (under challenge at this time) that gives an artist a 30 day window to apply. So.....this illustrates the danger of permits for free speech and is bureaucracy's way of eliminating the chance for many to exercise what is a fundamental right.

Much of the public feels that displaying your art is OK but selling it makes this "commercial" therefore it can be restricted by government.  Yes it can, and should. We have never denied the city's right to place restrictions upon our activity. Reasonable time place and manner rules are not only needed but welcome. The key word that is rarely heard from city legal counsel is "reasonable".Would a visual artist simply set up his art in an innocuous manner simply to show it to people? Might be fun, but as the courts have ruled "It is well settled that a speaker’s rights are not lost merely because compensation is received; a speaker is no less a speaker because he or she is paid to speak” 1988 Riley vs. National Federation of the Blind North Carolina, 487 U.S. 781, 801. Just as a newspaper collects the dollar to print more papers, the artist creates new work from the sale of other works.

The artists in St. Augustine did not create these decisions from the Federal Courts. They have been tested in court and well settled. We are asked often, "How does the City of St. Augustine get away with ignoring Federal law?" They simply rewrite another faulty ordinance after they lose in court defying the artists with limited means to go back into court. When one sitting city commissioner was told that if we cannot reach a Constitutionally valid agreement we will be forced to go back into court. Her reply was, "To what end? What would that accomplish?" Either she was warning us that the city would continue to rewrite illegal ordinances or she is clueless to the fact that we are fighting for the right of visual artists to survive in the nations oldest city.
Posted by Karl at 7:54 AM