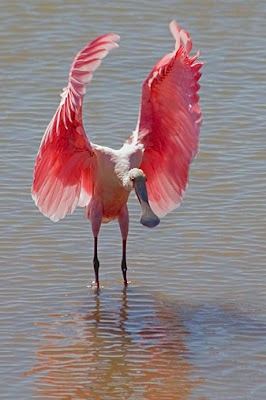 Future Trivia Question
The Roseate Spoonbill was unanimously voted "City Bird" by the St. Augustine City Commission on Aug. 27. There was word that Mayor Boles was going to hold out for a bannanaquit. Didn't happen. We are waiting for the next city Commission meeting to find out how many of the citizens will be up in arms because the following were not mentioned:

No one has mentioned the Cockaded Woodpecker or the Kingfisher ! This City Bird thing seems to have been rammed through without input from the citizens. This is another example of the smug callousness of our City officials.

We want an official city soft drink........ here it is Jones' Cane Soda. An official palm....The Sabal aka Cabbage palm because you can eat the hearts. Tuesday should be our official "day" because nothing else happens then and no one else has claimed yet.

So be aware ,do not shoot or otherwise molest our beautiful Roseate Spoonbill wading in the early morning marshes. Audubon and plenty of feather brokers almost decimated them in previous centuries.
Posted by Karl at 4:03 PM