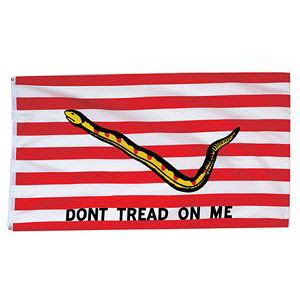 The St. Augustine street artist's defense attorney Tom Cushman has this flag sticker on the back window this "snazzy" ( Jeez, I'm using my Dad's 1950 words !) Solara convertible. Though we generally don;t like to use our vehicle for "bumper sticker philosophy" we admired the simplicity and strength of the sentiment expressed by the early Americans. The flag's story. We bought a bunch of them from the flag store on St. George Street. Hello prosecutor Upchurch.......we might have a new piece of art. Come down to the plaza and we will give you one. Everyone else pays two dollars if the cops aren't looking. Just kidding.............maybe.
Heard Around
Uhmm ,Would the answer be sixteen ounces?
"You don't use all the parts of the (marijuana) plant. Think what a pound of leaves would weigh," As reported by the St. Augustine Record by County police spokesman Sgt, Chuck Mulligan on the pot bust of a local high school teacher and amateur pot farmer. Check out the teacher's picture here. He's stoned isn't he? We've seen a particular artist with that same heavy lidded look.
You say artists disrupt the aesthetics of the Plaza?
For Bike Week, the City welcomes overflow Daytona bikers by offering free parking in front of the Cathedral while prohibiting other vehicles.
Welcome brother !
"The usher told me that it was a "private service" and wouldn't let me in." 50ish homeless man, sober but scruffy, wanting to attend 11 o'clock mass at the Cathedral.
Impulse Control
"HEY GOVERNOR ! STOP ARRESTING ARTISTS!" Shouted out by a cranky artist to Mayor Boles while he was impersonating a Spanish governor during Spanish Night watch.
I don't know......Maybe ......Oh.......SATAN!?
"We wouldn't need a "Red Light District" if the women of St. Augustine could be a little friendlier, ya know what I mean?" A local remarking upon activist B.J. Calady's protest poster regarding the city's restricting ordinances of "adult" businesses ( We don't have any and no one is planning one are they?)
"And When You Smile For The Camera I Know They're Gonna Love It"
Steely Dan
"It's illegal to protest with a hood covering your face." SAPD Sgt Michaux to peace marchers portraying Abu GhraibIraqi prisoners
Posted by Karl at 5:32 AM