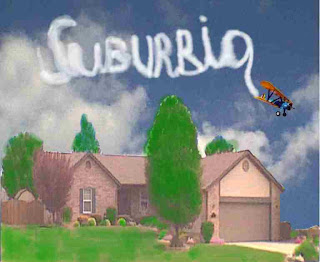 I am a long time divorced single man with no children to my name. I do not go to
malls and I avoid franchised businesses. I try to live a straightforward moral life,
though I'm uncomfortable whenever a politician or clergyman talks of "family
values". This translates, in my mind, to "Not You".. I prefer living in a place where I can walk to the grocery store, library or coffeshop. I want all different sorts of people around....black, yellow or brown, straight or otherwise. Organized religion gives me the "creeps". I like kids running around and I want their grandparents on the porch. I want to be able to grow weeds and paint my house lime green if I prefer. I do not like white or beige walls. Big trees, I love big trees! Suburbia doesn't want me.


You can probably tell that I'm not a "suburban" person. I'm uncomfortable when I visit the suburbs. My sister lives in the "burbs". When I first visited my sister I weaved my way through the treeless streets named after the developers family. ( Kendra Ann , Michael John) passing right by the house the first few visits. On that visit I was excited because I saw a street named "Polo Run". In Florida, I would love watcing polo matches. Unfortunately, it was only a name to add "cachet". For a place that has no trees the popular names for suburban steets seem to be, Briarwood, Sandalwood, Pinewood etc. Back in the 60's the word "Executive" was popular. In America you could be a truckdriver and still live on Executive Drive. I recall that there was a development in Atlanta, Ga. called "Bonanza Estates". The streets were named after the characters in the TV show. Little Joe Drive, Hoss Lane, and Cartwright Blvd. That's the family value thing. Marshall McCluhan said it,"Suburbia lives imaginatively in Bonanza-land."
The Myth of Suburbia

This "suburban culture" emerged just after World War II when the white trickle to the outer cities became a tide and the myth of suburbia began. The black GI's returned from their still segregated service and wanted what their white counterparts wanted, jobs, good schools for the kids and quiet enjoyment of life as our founding fathers stated. The blacks had a few more issues to deal with ....Equal Rights for one. Soon,as black Americans bought better homes as a result of changing some inequities in FHA ,"White Flight" began and the suburban commuter filled the roads and rails in to the city and out at night. Levittown,on Long Island had 82000 residents by 1960. These were homes financed mainly by FHA. Despite the law, covenants prevented black Americans from owning there. Had the population increased to such an extent that it was neccessary to convert farmland to housing tracts? No, according to historian Robert Cruikshank, who writes, "It was by no means necessary that cheap housing of decent quality be built in sprawling suburbs; they could just as well have been built as rowhouses along the English council house model with decent transportation links instead of miles of highways."
Lewis Mumford, an architectural critic and social commentator, said Levittown was a town where all the houses were the same and all were lived in by the same people, thinking the same thoughts, wearing the same clothes, making the same salaries, shopping in the same stores, and eating the same processed foods. This still generally holds true in the suburbs, though the residents would naturally disagree. As in any cultural group ( yes, suburbia is a cultural group) there are those individuals who are self styled experts in sociology and world trends though they have never left their television set to travel anywhere for any great length of time.
Suburbanites in general tend to feel that their values and their lifestyles are the best for all. Cultural differences are unheard of in suburbia therefore it is difficult for the residents to have empathy with another group. This can be a dangerous position when we are talking of lawmakers and law enforcement personnel coming from the suburbs. "Suburban Values" voters are less interested in justice and most interested in better schools, safer streets, and stronger families. The city or older town was perceived as an incubus that threatens suburban values and interests. Antiurbanism or anti-cosmopolitanism is rampant in the Midwest. Embracing traditional values and promoting parochialism , suburbia has become anti - "everything else". Dominant is a lack of awareness of modern culture and a perceived need to defend Suburban Values- both moral and material -- against foreign, disturbing elements.
Xenophobia

"Balkanization" is a new word. It refers to a breakup of a single state into divisions as was done after Yugoslavia disbanded into Herzegovina, Bosnia and Serbia. This tends to create political and economic instability and a form of nationalism that emmanates from each sector that translates to, us against you.This word has been used to describe suburbia, but I believe is better described as "ghettoization" Gated communities are becoming commonplace as a self imposed ghetto with a culture of it's own. You'll not see many children playing on the lawns of Senoir Citizen communities. You would rarely find a bachelor without kids living in my sister's development . In the Midwest U.S., smaller towns are now experiencing "white flight". The population im my town has declined to an equal rate of the increase in the new farmtown suburbs. It becomes economically rewarding to sell off farmland for tract housing. It is not all for racial reasons but lurking beneath the "liberals" explanation you most likely will find that there was a fear of "them" taking over. Unlke myself, many people prefer to stay with "their own." where they feel safe.
I have an eight year old niece who does not have one friend of color. Though the housing develpment has a number of military families from the nearby airbase, I do not see many black Americans there. You would have to seek them out. To do so as the parent of an eight year old seems a bit disingenuous. My niece will probably never meet a black kid until high school. Granted, it does seem to be a good place for young couples to raise children, the schools are good, the streets are safe.The only difficulty is the homogenous nature of it all. I'm sure that you can be raised in Montana and still develop a broad ecumenical attitude, but to develop prejudices against a group without experiences with them (not from the media) is illogical. I have a childhood friend who was mugged by a black kid. His fear of blacks is a physical, palpable thing to behold. He becomes pointedly nervous if a black person is near him. His eyes dart around waiting for "something to happen". Psychological sessions have not eased this fear. The fact is, and he didn't mention this to his counselor, he was taught this by his family and not the incident with the kid.I recall that his dad stayed up all night when riots were occuring 20 miles away in downtown East St.Louis during the 60's. His racism is based upon fear of the unknown. He selected his community in Missouri on the basis of race demographics. Everyday life must be a scary proposition for him darting though the mixed neighborhoods to get to his "safe" suburb. He will also not eat ethnic foods ( Mexican, Asian, etc) and does not watch foreign films. He still thinks that Czecoslovakia and Yugoslavia exists. He would also sit at a redlight in a deserted desert crossroads for hours until the light changed. You guessed it, he works for the Federal Government. Who would want to live like this?


copyright 2003,Lost In The Heartland
* Mumford was wrong though when
he called the development an "instant slum" .
It has held up well over the past 40 years and
owners have individualized their crackerbox
homes that sell for about 275 K now
Posted by Karl at 3:19 PM