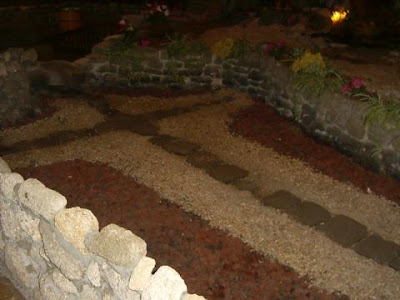 Questionable DeLeon Cross at the Fountain of Youth
Despite having little to no basis in truth, we here in St. Augustine still have remnants of "tourist stories"that have been repeated so often that they are accepted as fact. The stories persist because Americans love a good story, and when it comes to history, an exciting fabrication is sometimes just as good as the truth. As they say in the John Wayne movie The Man Who Shot Liberty Valance, “When legend becomes fact, print the legend.”
The Fountain of Youth is a must see stop for hundreds of tourists a day. The story of Ponce de Leon's landing is told in a theater like setting with a huge creaky globe and 1950's projector technology. The coquina cross reportedly discovered by a worker for Louella Day, an enterprising woman at the turn of the 20th century, she began to charge an admission price to drink from the waters of the free flowing spring found on the property.
In 1954, Walter Frazier, the grandfather of the current operators went through a court battle with the publishers of the Saturday Evening Post. Frazer felt that he was libeled in an article that characterized him as "a faker, fabricator, and foister of frauds as genuine landmarks of historical interest." After withdrawing his complaint concerning his "facts" on the Fountain of Youth" ,he went on to challenge the magazine's characterization of the "oldest wooden schoolhouse" as a fake.
Curtis Publishing won on appeal in the Fifth Circuit Court. The Court let stand the article and Chief Justice Hutchinson wrote , "........there is no evidence to support his contention that it was ever used as a school before the Civil War, Fraser (meaning plaintiff) derives a comfortable income from the oldest wooden schoolhouse by charging tourists fifty cents- including the Federal Amusement Tax- to inspect the curios on display inside. * * * " Frazer lost and lost bad.
This case makes for interesting reading.
Dr. Kathleen Deegan of the University of Florida deals in facts as a scholar and archaeologist. Her studies of the Fountain of Youth property provides that the original Timucuan village of Seloy and the landing area for Menendez may have been here. This important information super cedes any unfounded claims of youth water or Ponce's arrival.
Another article (1921) by Charles Reynolds states "The visitor may be "ground through" the St. Francis street house( the oldest house). Fort Marion and the Ponce de Leon mission, imbibe the parrot lectures and go away with a head full of misinformation about a fanciful St. Augustine and its past. But there is another St. Augustine of which he will have learned little or nothing — the place of genuine historic interest and truly romantic associations."
In 2003 The National Trust for Historic Preservation completed an exhaustive study and wrote ......
"Travelers believe that they are hearing the truth..........sites are presented as heritage
attractions, but do not live up to standards of authenticity.Instead, they embellish stories, relying on myths to “improve”on the historical facts. This includes sites such as the Fountain
of Youth and Oldest Wooden Schoolhouse."
This last study wasn't very popular with the "powers that be" who derive their income from the family businesses established decades before. Nothing more was said about this report.
Guides for the "Ghost Tours" must take a two page test at City Hall to assure that they provide true and authentic history. We won't even make a comment on this.
We have a wealth of authentic history and to embellish with fake architecture and colorful but untrue stories only detracts and encourages the tag "Tourist Trap".
Posted by Karl at 12:18 PM