Stop Waving That Thing Around ! 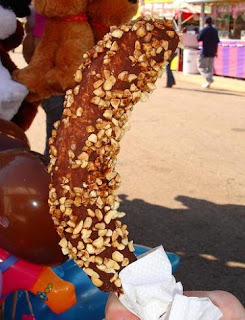 This is a chocolate covered frozen banana rolled in chopped nuts. It tastes better than it looks. In fact it is delicious!Since the city administration has opened the plaza as a "free for all"(their words) to merchandise vendors ,you can find two or three mobile carts vending these goodies. It is our opinion that the best and freshest of these is from the Whetstone Chocolate cart that you'll find in the Plaza.

Interestingly owner Henry Whetstone wrote a May editorial in the St. Augustine Record. He first established his credentials by stating his grandfather owned this, his father owned that and that he himself has owned seven businesses in addition to a colonial building. He also writes that his family provided the land where the Art Association is located today. The credentials establish that his family has owned a lot of stuff. Then he went on to say. "I consider my products just as much an artistic work of art as a painter, artist, or sculpture does his works of art." Good for Mr. Whetstone. This shows great pride in his product, and from what I've sampled ,it is deserved. Perhaps he can elaborate in another editorial and give us the message that he is trying to communicate with his "art". Yes, we know that some wags will say that his message is "Eat me!". Some. after looking at the photo above will make some crack about it's phallic shape. Yes sir Mr. Whetstone, "EVERYTHING IS ART!" but for some reason some people cannot understand that this was never an issue. The Federal courts have not defined what is art and hopefully never will. Understand please that the Federal courts have been asked to define which type of art is Constitutionally protected for display and sale in the same fashion that books and newspapers are. They determined that prints , paintings, photographs and sculpture is fully protected symbolic speech. A line was drawn that if a piece of art has a utilitarian purpose such as jewelry, or pots and baskets it then would not be in the fully protected category.

Mr. Whetstone goes on to write"The minute that money changes hands, that is when I question the definition of freedom of speech." Yes, some newspapers are free and advertiser supported but most charge at the vending stand. What Mr. Whetstone doesn't acknowledge is that prints, paintings,sculpture and photographs are in the free speech category as stated by the courts. If a speaker was hired to give an oration from the gazebo in the Plaza, would his free speech be restricted because he was paid? Does he need a permit? No, he doesn't.

"I do not like to see the grass trampled down by someone trying to sell their products, nor do I like to see the sidewalks cluttered with those same products." writes Mr. Whetstone. This is complete hypocrisy since this is exactly what he is doing. Take a look at the wrappers left behind and the wheel tracks of the cart..It's OK for him because his family has deep roots in the community? The Whetstones feel that they do not like this for others but it's OK for them? We do not believe that Mr. Whetstone feels this way but that he cannot perceive that we would do our art even during difficult financial times. Mr. Whetstone stopped making his Chocolate Oranges a few years back and laid off twenty employees because it was economically unfeasible. What we artist's do is economically unfeasible but we continue on don't we? This is a philosophical difference.

At the end of a the each vending day selling these frozen "art" confections, his, son in law, former St.John's County Commissioner Bruce McGuire, sometimes comes in to load up the cart and takes it back to the factory.

"I say the courts are wrong, and the judges need to be replaced." writes Mr. Whetstone.

"A little nonsense now and then is relished by the wisest men". .....
Willy Wonka
Mr. Whetstone's editorial
Atty Tom Cushman's editorial
Posted by Karl at 2:26 PM