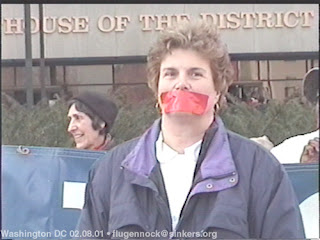 Long-time D.C. Statehood Green Party activist Debby Hanrahan has won a settlement in her First Amendment-false arrest lawsuit against Amtrak (The National Railroad Passenger Corp.) and has directed that almost all of the settlement proceeds other than lawyers' fees and her expenses go to two local civil liberties organizations. The two organizations will receive a total of $35,000.
Hanrahan, 68, a leading participant in the No DC Taxes for Baseball coalition which opposed public financing of a new baseball stadium, was arrested without any warning by Amtrak police in the Grand Concourse in Washington, D.C.'s Union Station on November 22, 2004 during a public rally promoting the naming of the Washington Nationals baseball team. For quietly holding a poster opposing public financing, she was charged with unlawful entry and jailed for 28 hours before her release on her own recognizance after a court appearance.
Hanrahan said that a portion of the settlement will go for fees incurred by the law firm of veteran civil liberties attorney James Klimaski. Klimaski's firm took the case on a pro bono basis and spent hundreds of hours in legal work before Klimaski negotiated the settlement with Amtrak earlier this month. The suit was filed in 2005 in D.C. Superior Court, after Hanrahan's criminal attorney, Paul J. Riley, successfully got the criminal charge dropped in January 2005.
Continued
Posted by Karl at 2:47 PM