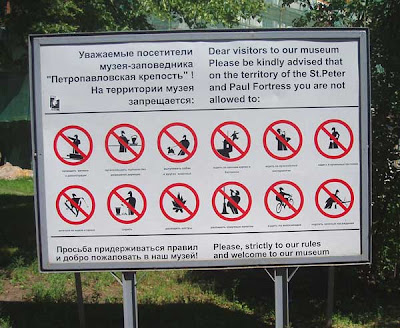 An Editorial in the recent St. Augustine Record made suggestions to alleviate the presence of transient persons in the Plaza. Campamento Plaza is the clever name the editorial writer gave to the Plaza De La Constitucion.

The newspaper suggested putting up "Keep off the Grass" signs. Suspending the rule only for concerts or special city approved events.

The unidentified editor suggested that if "Keep Off" signs aren't acceptable, small gardens should be created to "break up the inviting carpet-like grass."

Our City officials can join the regulatory mind set that is running rampant in this country ( C'mon you haven't noticed?). In New York City, citizens are regularly fined for taking their feet off their bicycle pedals while riding, feeding bread to pigeons (they are allowed to feed bread to sparrows and finches and other birds, but if any pigeons show up to join in the feast, they're in trouble), sitting on milk crates, smoking beneath awnings, and sitting down on subway stairs (in fact, a pregnant woman was once accosted by NYC officials for stopping for a moment to rest on a subway stairway, and she had to go to court to fight the fine).

We say Solutions not Prosecutions ! Criminalizing ordinary behaviour is a dangerous thing.How is it fair or legal to fine an unhoused citizen whose only "crime" is to sit, to eat, to sleep, to stay warm or dry, or make a few dollars to buy essentials? These are all activities taken for granted by people who can perform these functions at home.Even the "public drunkeness" of "serial inebriates," can be caused by the sufferer's use of alcohol or drugs which may be the only anesthetic available to deaden stress and pain --- the pain of loneliness, isolation, or fear, or physical discomfort ---or the savage pain of homelessness. This County needs work on this.
"Community Policing" is often used to define strategies designed to prevent crime before a patrol officer or detective has to slap handcuffs on somebody. A police presence in the Plaza is expensive yes, but how expensive is it to selectively enforce stepping on the grass or napping under a tree.( we believe that parks are there for this reason ) Build a Police substation Kiosk (architecturally compliant with our city ambiance) and use it. Here are some used police kiosks that might work.
Posted by Karl at 9:49 AM