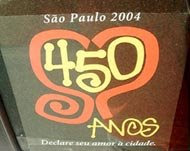 St. Augustine citizens are starting to prepare for the city's 450th birthday celebration in 2015. Jamestown, Va had it's 400th anniversary last year and it brought out the Queen of England and the President of the United States. Pensacola Fla. has begun it's preparations for a 450th celebration in 2009,billing itself arguably as"North America’s First Major European Settlement". The term North America may mean different things to different people in the world according to the context.

No one needs to remind people that St. Augustine is a "living city". When we celebrate our own birthdates we think of the present and future as well as the past.

Let's also remember that the geographic area of St. Augustine was a busy population center when the Spanish landed. See Seloy