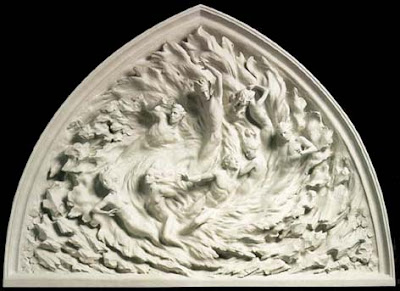 A local woman has commissioned a recasting of a portion of Frederick Hart's bronze from the Washington National Cathedral. The local dealer for the Hart estate is Cutter and Cutter who has four galleries ( the Dr. Suess Gallery coming soon) surrounding the Plaza De La Constitucion.

The Phil McDaniel Cultural Council has suggested placement of this sculpture fragment in the courtyard of City Hall , the Lightner Museum Building. The local paper reported that Mayor Joe Boles said "This is the first time the city has received a gift of public art"
If he said this we suppose that he can be excused since it has been a long time that a citizen had the largesse to donate art. Flagler's buddy, Dr. Anderson of Markland donated bronzes (Menendez and flagpole) , marble (lions) and concrete (birdbath) during his lifetiime - 1926.

The city commission will decide next Monday if they can or will accept the gift. STORY WITH PIC
Hart had an interesting copyright battle with the Warner Brother's film "The Devil's Advocate". The angels were doing something that angels don't do.
Posted by Karl at 7:18 PM