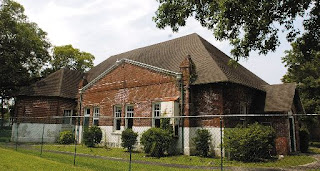 Regarding "old things". Until architect Dave Mancino pointed it out, it was not common knowledge that this building on San Marco Blvd, built in 1883, served as the first railroad depot for the Jacksonville, St. Augustine & Halifax River Railroad, later part of the Florida East Coast railway purchased by Henry Flagler. In 1886, the structure was turned into a water works, later an Art Association and more recently, The Garden Club headquarters.
We in St. Augustine realize that "historical" is much more than the 1600's and 1700's. Here is a building that can be saved as a community center but it will require 2.5 million dollars. With funds as tight as it is, immediate measures should be taken to shore up this building that is in imminent danger of collapse. Later we can find funds to restore this interesting structure. More Here
Posted by Karl at 8:47 AM