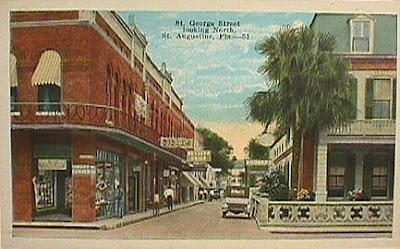 St. George and Cathedral Place, circa 1925

At this time there is a parking lot with an ATM "cottage" converted into a nice little tour info booth on the corner (right) above. Tomorrow's City Commission meeting will begin public comment on what type of building should go there. City Commissioner Donald Crichlow will abstain since he is the architect for the Jacksonville developer. It can be a contentious issue if the Newspaper story comments are any indication.

We agree with historian David Nolan ( The Houses of St. Augustine)that the City of St. Augustine should not be a "Disneyland" of faux Spanish architecture. Frankly ,the Flagler College is an architectural "goulash" of an 1883 idea about Spanish/Moorish/Mediterranean styles that never really existed together. We are a living city and this is the uniqueness of the "nation's oldest continuously occupied,European settlement" . Some details in the story here Scroll down for comments. Architect's Statement