What Would Krishna Do? 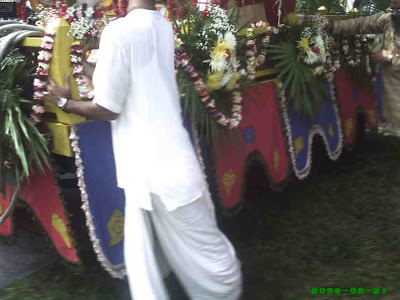 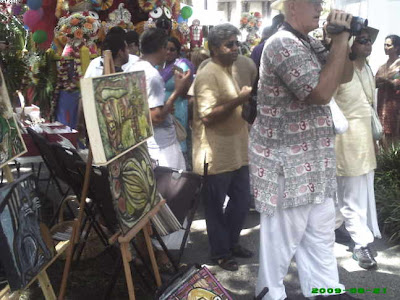 BOTTLENECK!
On Saturday, the Plaza contained the motley crew of flea market vendors hawking their trinkets without concern to the grass, the din that they create or the foot traffic that they disrupt. Chasing the tourist dollar was all important. The best thing Saturday was the return of Festival of the Chariot.This festival originated in India, where it is known as "Ratha Yatra," and is still held yearly in many cities throughout India. Vegetarian food was served and it was a nice event, though the attendance has been dropping regularly over the past three years. The organizers told me that they definitely get a chill from the city administration who would prefer that they hold the event on the edge of town at treeless Francis Field.
The three artists who set on Saturday have been self exiled away from the dozen mercantile vendors. They have been setting up their exhibits on the northeast corner of the Plaza, away from the plastic beads , hot dogs,used shoes and even kitchen sinks for sale (not kidding!). A festival coordinator told us that the hand pulled chariot was to follow the route of other years ,as published in the St. Augustine Record. (down Cordova, Orange, Castillo, St. Francis, Cordova, back to King Street and conclude at the plaza.) Instead, the city rerouted the 3/4 mile parade from Cathedral, down the Plaza sidewalk where the artists had set up along the sidewalk, ending at a bottleneck at the Constitutional Monument. Instead of the traditional .75 mile parade, it ended 30 yards from where it started. The chariot float is 13 feet wide and the sidewalk is six feet wide. Why would the city do this? Take a look at the picture above, the float is behind.This was the bottleneck. We artists have always worked with the festival but no one informed us of a route change with a gargantuan colorful chariot heading our way.Even after moving our artworks the guys had to pull it off into the grass because shrubbery did not permit passage. The city surely had their photographers there and we are sure to see these pictures again with commentary on how "the artists cause impediment to passage through the Plaza .""This is the first time they altered our route, it really wasn't a parade as it is supposed to be," said a participant who didn't want his named used."This was not our idea".