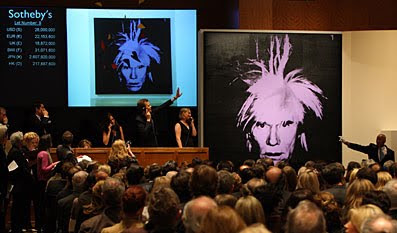 The troubled economy not withstanding, the rarefied world of International Fine Art Auctions is setting records for the prices paid. The press has covered the May 12 auction at Sotheby's in N.Y.C. reporting on Warhol's Self Portrait sold at $32.6 million dollars. The original estimate was $10 million. Dick Cavett, Fran Lebowitz and Peter Max were among the bidders (where do these people get their money?)The mural sized work above is referred to in most news reports as a "painting". The work is actually a silkscreen on canvas It is done from a photo mechanical stencil made from a photograph.Multiples can be made with the original screens. This was a purple on black work. There are four other versions in green yellow, blue and red.

This is an example of Art as a commodity. The unknown buyer ( non institutional as far as is known) may or may not exhibit the work but if history proves out, they will be assured a good profit if they choose to sell down the road. The designer Tom Ford purchased the work from a private gallery in 1998 netting probably 24 million dollars if we use the pre sale estimate as a guide.

Crazy...yes.....can we plebeian citizens begin to comprehend the money and capital owned by these kings and queens of society? Excess? I say yes. Not that I would condone it but this may give insight into those "nuts" who slash paintings in museums.
Posted by Karl at 3:41 PM