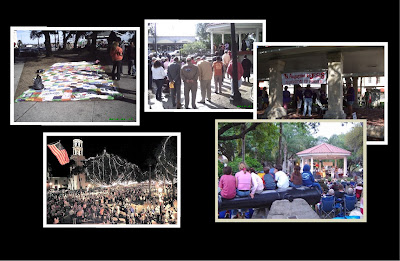 These recent snapshots above are of "city sanctioned" events that includes religious and political First Amendment activity. Visual artists are banned claiming that we block sidewalks and prevent entry and egress into the plaza. The city violates the ordinance repeatedly. No artist has ever blocked a sidewalk 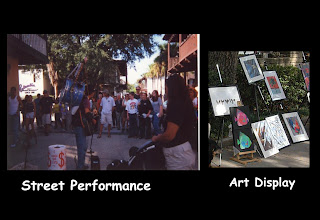 Click pic to enlarge
The City of St. Augustine is moving to make a large part of  Old Town as "City proprietary property" meaning that the public no longer "owns" public space but that the City Hall owns this space, forgetting that they are simply the stewards of property "owned" by the public.

The main surface argument to ban visual artists has been to cite health and safety, claiming that the painters and art vendors (three of us at this time) block foot traffic preventing EMT's and police action. There had been problems when general merchandise vendors and street performers caused crowds and made excessive noise.(see photo above) Merchandise vendors and Street performers present a problem that does not exist with the art vendors. Federal Court decisions (Bery vs NYC) affirm that vendors of paintings, prints, photographs and sculptors have the right to display and sell on public property without the prior restraint of fees or licence. This decision stated that these artworks were "fully protected speech". General merchandise is not included in this as "protected". Street performers are limited in their rights by the sound and the crowds that they tend to produce. Since Street performers have less constitutional rights than does a visual artist the City has decided to label visual artists, "street performers".

After a fee of $75.00 the city requires that a photograph be on file and worn on the artist's clothing along with the license.  The visual artist is to share space with merchandise vendors and musicians within the 60'x 20" Slave Market in the east part of the Plaza. Five spaces are allotted to First Amendment activity. These are illegal restrictions.

The city administrators simply turn a blind eye to well established case law that protects us. "They can't do that". We hear that all of the time. Can we arrest them? No. What we can do is go back into Federal Court and win again, costing taxpayers another $100, 000 +. This is in the works, meanwhile we are essentially out of work.
Posted by Karl at 11:08 AM