The Case of The Missing Cross 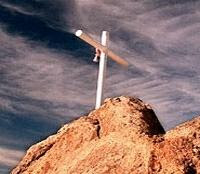 Public property religious art in St. Augustine, Fl ?
This is the Mojave Cross. Have you heard of it? It's been at the center of a U.S. Constitutional debate for the last 10 years. An April Supreme Court decision keeps the eight foot pipe cross on public property, at least until a lower court addresses some issues brought forth by our Supreme Court Justices. It is a conservative decision and it was close....five to four. This is seen as a win for those who wanted the cross to stay as it has since the late 30's.
A new twist,  ...Someone swiped the cross........ It's gone...... A National Park spokesman said that while there are no suspects, the thief could have been a scrap metal scavenger ...... HA.....The Desert Dispatch has since received a copy of an anonymous letter received by the Parks Department :
Here is what it said:
"1. The cross in question was not vandalized. It was simply moved. This was done lovingly and with great care.
2. The cross has been carefully preserved. It has not been destroyed as many have assumed.
3. I am a Veteran.
4. A small non-sectarian monument was brought to place at the site but technical difficulties prevented this from happening at the time the cross was moved to its new location.
5. The cross was erected illegally on public land in 1998 by a private individual named Henry Sandoz. Since then the government has actively worked to promote the continued existence of the cross, even as it excluded other monuments from differing religions. This favoritism and exclusion clearly violates the establishment clause of the US Constitution.
6. Anthony Kennedy desecrated and marginalized the memory and sacrifice of all those non-Christians that died in WWI when he wrote: 'Here one Latin cross in the desert evokes far more than religion. It evokes thousands of small crosses in foreign fields marking the graves of Americans who fell in battles — battles whose tragedies are compounded if the fallen are forgotten.' The irony and tragedy of that statement is unique.
7. Justice Kennedy’s words in particular and others like them from the other Justices caused me to act.
8. At the time of its removal there was nothing to identify the cross as a memorial of any kind, and the simple fact of the matter is that the only thing it represented was an oddly placed tribute to Christ. This cross evoked nothing of the sort that Justice Kennedy writes of, it was in the end simply a cross in the desert.
9. Discrimination in any form is intolerable, as is hatred.
10. Discrimination or hatred based upon religion should be despised by all Americans, and offering that this event was caused by hatred or malice is simply ignorance of the actual intent.
11. Despite what many people are saying, this act was definitively not anti-Christian. It was instead anti-discrimination. If this act was anti-Christian, the cross would not have been cared for so reverently. An anti-Christian response would have been to simply destroy the cross and leave the pieces in the desert.
12. We as a nation need to change the dialogue and stop pretending that this is about a war memorial. If it is a memorial, then we need to stop arguing about the cross and instead place a proper memorial on that site, one that respects Christians and non-Christians alike, and one that is actually recognizable as a war memorial.
13. If an appropriate and permanent non-sectarian memorial is placed at the site the cross will be immediately returned to Mr. Sandoz.
14. Alternatively, if a place can be found that memorializes the Christian Veterans of WWI that is not on public land the Cross will promptly be forwarded with care and reverence for installation at the private site.
15. In short, this has happened because as Abraham Lincoln said: 'To stand in silence when they should be protesting makes cowards out of men.' Perhaps this was an inappropriate form of protest if so I humbly request your forgiveness and understanding for the actions that I have taken here."
Be assured ,the Christian zealots will have a replacement cross up soon showing us all that this is a "Christian Nation" and you all better fall in line if you know what's good for you. Meanwhile some National Park employee is thinking " "Goddamn, I'm low man on the totem pole here....there gonna make me sit  in the middle of the night in the middle of nowhere and watch that damn cross. I just know it."