For Entertainment Purposes Only 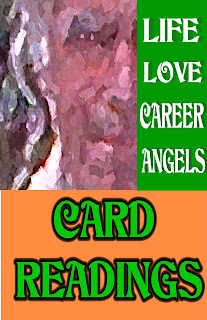 Ironically, there was a recent City ordinance  that made it illegal to sell artwork in the Plaza de la Constitucion (this is still so) yet a tarot reader could do a reading for money.

One day fellow artist Richard Childs suggested doing a card reading in the Plaza since we were disallowed from letting people buy our artwork but could only display. I was not keen on this idea since I am a non believer. We had fun talking about it and the next day we double teamed an effort in securing our first client (there was no charge or fee). Richard would look for a likely prospect and catch their eye by holding up the ace of spades and staring at the person while waving them over.(note: women will tolerate a stare better than a male will). Richard, a 76 year old retired high school teacher had the air of shamanic authority about him. Female,18 to 60 Hispanic, stylishly dressed ..this was a general profile that of  Richard was seeking.

After catching the passersby's attention, Richard offered a card reading by Suvo (me) seated at a small table with two canvas chairs. Sometimes, like Edgar Cayce(The "Sleeping Prophet") ,I was taking a brief nap.Karl the Rotty was lounging next to me. We were "colorful".

After the client was seated, I spent the next few minutes explaining that this was for "entertainment purposes only" and just a fun thing to do with cards. That said, I would ask them very general questions about themselves asking them not to tell me details ( i.e.type of employment, married, kids etc.) The details were for the cards I said. The mechanics of the card draw and layout changed according to my whim. My remarks were based upon observations as to what type of clothing and ornamentation that they were wearing, who was with them( I would not permit listeners since this reading was private and the cards would probably talk about them) and the person's demeanor, etc.

"The cards say that you have adolescent kids, at least one"........yes
"You need more creativity in your work to be fulfilled".......that's for sure
"According to the cards your son is going through a difficult transition (aren't all adolescents).........oh boy, uh huh.
"It will pass but you gotta be patient".......good
"Your parents are both alive?",....No,my dad died in 1998.
"You will have a different job in two years either with your current employer or a new one, possibly self employed. This is a thought that you have had?".........absolutely
"You do not have enough"me"time and tend to be a "giver"sometimes to a fault".......Boy.that's for sure.
"You have spiritual presences near you and it is the essence of your father and a grandmother"...........I knew it, absolutely, that would be Nana.
"At the end of this reading go into the Cathedral (whether Catholic or not) light a candle,sit in the front row and see  if you can feel the presence of Dad, Nana or both."....... (reporting back,they always felt a presence, even my Jewish client.)

More questions from the clients followed and the card's answers tended to be within the question. It was all done very pleasantly and the client left feeling better, especially when I told them that the card's results may or may not be so, depending upon their actions.

After  awhile I had about five regulars who came to me twice a month wanting a card reading and they usually brought a friend. Sometimes tears were shed and the client experienced a catharsis over some crisis. This was street psychology.

In April of 2009,Federal Judge Marcia Morales Howard ordered that the visual artists may sell their works on public property, I retired as a "card reader".
Posted by Karl at 4:19 PM