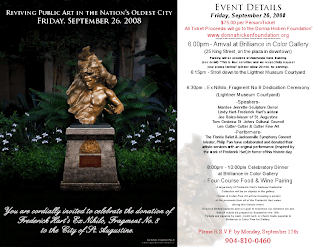 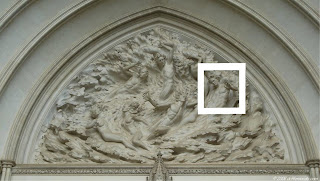 The late artist Frederick Hart's sculptural bas relief is featured in Washington, D.C. on the National Cathedral. Mounted in the tympanum above the center portal door of the cathedral is his monumental sculpture entitled Ex Nihilo (out of nothing)
A posthumous bronze casting of Ex Nihilo has been bestowed to the City of St. Augustine by local resident, Ms. Mardee Sue Jenrette. Ms. Jenrette is battling breast cancer and has been reflecting on the blessings she has enjoyed throughout her life and on the legacy she would like to leave behind.
On Monday, June 9th, 2008, the St. Augustine City Commission agreed to accept the gift aand it has since been installed in the City Hall courtyard in the Lightner building.
Is this a religious work? Since it was created for a Christian cathedral it may be considered that. Ex Nihilo may represent the theory of "creationism". The term is used in theological debate regarding the existence of man and the universe. This debate is wider than narrow religious dogmatic confines. We feel that it passes the test for non religious art on public lands. Some would disagree
Some feel that a 5 to 4 Supreme Court decision in April 2010 allowed government to place religious monuments upon public land. The decision actually allowed transfer of land to private owners if an existing monument was already in place. This decision is controversial. The result has been interesting, as the above post would indicate.
Posted by Karl at 1:18 PM