Clash Between Courts' Review of Advertising and the First Amendment 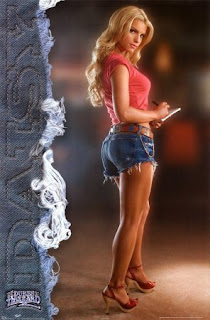 We had a choice of illustrating this story with William Shatner or Jessica Simpson , both spokepeople for Direct TV. You see which one we chose. We pander and we are not even trying to sell anything.
By JULIE HILDEN ----
Tuesday, Aug. 21, 2007

Suppose I told you that a federal appeals court had deemed a political flyer "literally false" - even while conceding that this falseness was implicit, rather than apparent to all on the face of the flyer, and that it was context-dependent. In addition, the court had issued an injunction commanding the flyer's authors to immediately stop distributing it, even before the court had reached any ultimate decision on the merits.
My guess is that you'd be appalled........continued.
Posted by Karl at 5:53 PM