We Love New York Y'all 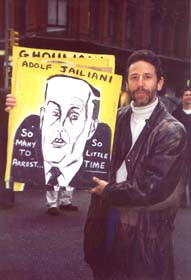 Years ago during the Guiliani reign in N.Y.C. we saw a guy being led away from the front of the Metropolitan Museum of Art (or it could have been the Reference Library on 5th Ave). He was shouting "THE REVOLUTION WILL NOT BE TELEVISED !, THE REVOLUTION WILL NOT BE TELEVISED!"He was handcuffed and being led away into a squad car. We figured that it was just another"nut"on the streets of N.Y.C. We have recently deduced that we were seeing Robert Lederman being arrested for displaying his art.
We communicate with Robert once in awhile and respect his long running battle for street artist's rights. Lederman was arrested 41 times, was never convicted and won 4 Federal lawsuits about the arrests, Lederman et al v City of NY; Lederman v City of NY; Lederman et al v Giuliani; Lederman v US. He continues to be an active advocate for the cause.
Here is a film of Lederman's many arrests.
Posted by Karl at 11:48 AM