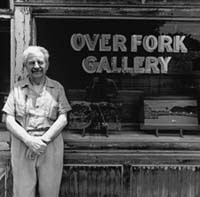 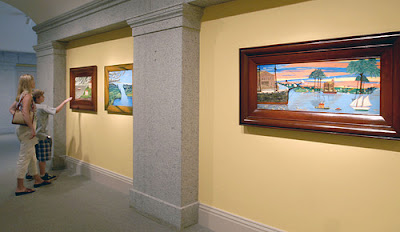 Nicknamed 'The Dragon of St. George's Street, Earl Cunningham is notable as an eccentric artist who literally chased away customers and rarely sold a painting. He is best known as a marine painter and worked mostly in Florida and Maine from the 1920s to the 1970s. His style combines naïve and fauve. Semi-literate and self-taught born in Edgecomb, Maine in 1893, Cunningham left his family farm at the age of thirteen, traveling up and down the eastern Seaboard before settling in St. Augustine in 1949. He operated the Overfork Gallery in St. Augustine. He died here in 1977.

Earl Cunningham's paintings reached national prominence via a wealthy collector who wandered into his gallery and were eventually exhibited in one-man exhibitions in thirty museums across the United States. His work is represented in 10 major museums including the Metropolitan Museum of Art, the Smithsonian American Art Museum, and the Abbey Aldrich Rockefeller Museum in Williamsburg, Virginia. His paintings have also been displayed in several U.S. embassies as part of the U.S. Department of State’s Art in Embassies Program. Link Here In 2007, Cunningham will be the first folk artist to have a one-man exhibition at the Smithsonian American Art Museum.
Posted by Karl at 1:18 PM