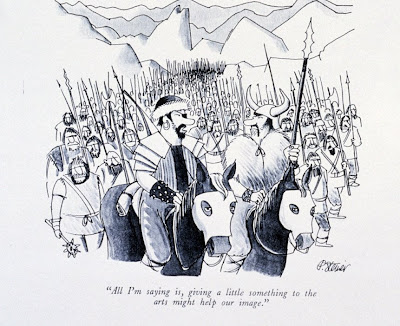 The Artist vendors in St. Augustine are a amalgam of the average citizenry. Misconceptions occur, though most have either professional or academic training or years of experience in the creation of their works. Some of our artists own homes in town and hold jobs elsewhere and some rely on the sales of their art for primary income. The claim of constitutional right to show and sell their art on public property did not come from thin air nor is it a matter of artists wanting "a free ride". It is a fundamental free speech issue that has been decided and affirmed in the Federal courts. The most recent decision was made on April 22 when the city of Sparks Nevada appealed a $250K judgement favoring an artist whose civil rights were violated (White vs Sparks) The U.S. Supreme Court refused to overturn the decision and the City Council agreed to pay the 250, 000 dollars for civil rights violation. (STORY)

The City of St. Augustine chooses to ignore these rulings and constantly violates the civil right of local artists going so far as to jail some for standing up for their right. The five City Commissioners who voted us out of most of St. Augustine public space haven't the backbone to give us the "real reason" for their illegitimate stand. Here it is....................with government funding being cut and further budget cuts expected the city is looking elsewhere for revenue to maintain our beautiful historic treasure of a town. Private sources will be and are being solicited for these funds.
The corporatization of our cities and towns is occurring all over the country. Services are being outsourced and now public properties that we all enjoy are in jeopardy of being put into the hands of private companies. Do not expect,in time, that these "altruistic" corporations will be passive. Business Improvement Districts(B.I.D.'s) are hidden private corporations that can and will wrest control of public properties from us. These B.I.D.'s can take over public properties and call it "rehabilitation"(Union Square. N.Y.C.) I'm a 13 year old worn out old dog but I cannot walk on my leash with my artist friend on Beale Street in Memphis or some private security force will eject me to the next adjacent street. NO ANIMALS OR REPTILES ALLOWED" says the sign.

This is not alarmist language....it is happening. It is understandable that new revenue streams may be needed for local governments to function but there are costs other than financial and we gotta be aware and vigilant that those who are supposed to hold our public trust do not sell us out. So friends this is more that six artists who want to set up a "free shop" on public property. Our rights are your rights. Help us.
Posted by Karl at 6:20 AM 2 comments:

Get Thee A Republican ! 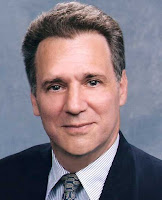 Though we have two full time attorneys on the city payroll ,the City of St. Augustine has hired Michael Kahn as special counsel against Suvo's appeal for his December 2oo6 citation for an art exhibit on St. George Street

Mr. Kahn has been active in Republican politics for many years. Presently he serves as Republican counsel to Brevard County, Florida, the eighth largest county in Florida. He was the co chairman for South Brevard for the Jeb Bush for Governor reelection campaign and George W. Bush for President, reelection campaign. He has also been active in numerous local political races.

At a recent City Commission meeting he boasted "I do not come cheap". His practice, out of Melbourne Florida is self described as having an emphasis on the First Amendment. Lately he has been doing a "Trouble In River City""routine with various Florida communities. The trouble in town he warns of is that we may have Strip Clubs coming to town! For a fee he will write an ordinance concerning S.O.B.s (Sexually Oriented Businesses) After lots of handwringing and public uproar. The towns either accept his ordinance or reject it. Nice gig. The City of St. Augustine has paid him a substantial amount of money in recent years. They apparently feel that Duke Law School wins out over The Florida Coastal School of Law. It's your money folks. Suvo attended Belleville Junior College until he was declared IY by the draftboard at which time he dropped out.From then on he attended classes at various colleges and universities when the mood struck. The word "slacker" was not in general use at that time (late 6o's) 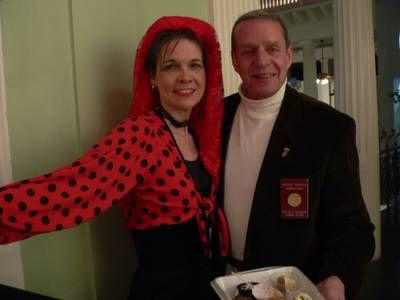 At one time we were told that city commissioner and former mayor George Gardner was sympathetic to the free speech rights of visual artists. Gardner has decided not to run for another term. As a former print reporter George was good at telling everybody what they wanted to hear but short on following through. Artist Suvo can tell you that Gardner rudely took three phone calls as he (Suvo) tried to discuss this issue with the commish. "The guy is a phony", says Suvo. "He was completely uninformed and it was clear that he had made up his mind, I was ushered out after only a few minutes."His vote to have artists expelled from the historic district was joined by the other four commissioners. Gardner sent out an e mail newsletter where he explained that this was done because County Judge Tinlin ruled that all vendors (sun glass merchants, flea market items etc.) must be permitted or the alternative would be to ban all vending in the historic district including First Amendment protected materials ( paintings, prints, sculpture and photographs) This fallacy was repeated in the press by Mayor Joe Boles and Erroll Jones. The St. Augustine Record also reported this as fact. City prosecutor Robin Upchurch included this as "fact" in her presentations to the commissioners.(See The Big Lie) Here is the truth:

"The Court finds that the ordinance 22-6 as applied to the defendants is an unconstitutional restriction "of their freedom of speech or expression as guaranteed under the First and Fourteenth amendments to the U.S. Constitution as well as Article One of the Florida Constitution." St. Johns County,St. Augustine FL. Heard 9/26/07 by County Court Judge Charles Tinlin. Decision rendered 10/10/08

Anyone following this case could read Tinlin's decision on this blog. Nothing in the judges decision states that the city must permit all merchandising or ban all merchandising. We do not agree with his entire interpretation some of which is faulty and flies in the face of the First Amendment. There is a substantial difference in what is protected speech guaranteed by the First Amendment and other "merchandise such as jewelry and beads.

So long Commissioner. We prefer to have those who disagree with us to be direct and say so. Go back to your "do nothing" committees and workshops. 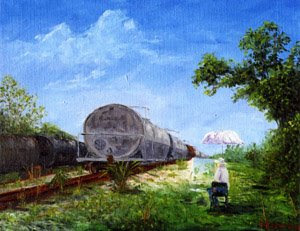 We think that this is a cool painting by Debbie Boon , Art In The Market artist Charles Dickinson's partner. That is Charles depicted doing a painting at a St. Joe "Paint Out". You can tell by the engine's smokestack that the train has just passed. Both artists are plein air painters, meaning that they execute thir works outdoors as they see it. Debbie had to be pretty quick to capture a moving locomotive don't you think? Charles is wearing his treasured "Tilley Hat" These hats will be replaced free if they ever wear out, mildew, or shrink. They do not come cheap. Charles found his lying on the ground on one of his painting excursions. How lucky can you get?
Currently Boon and Dickinson have a two-artist exhibit, Visions and Voices: a Musical and Visual Journey with Debbie Boon. This is a unique idea combining music and art. Both Boon and Dickinson have created paintings inspired by Debbie's original songs. Debbie performed at the opening night of the Exhibit Friday March 28. The exhibit is designed to be interactive and the artists opened the floor to lively discussion about the creative process. http://www.apalachicolamuseumofart.org/
Posted by Karl at 7:48 AM 1 comment: