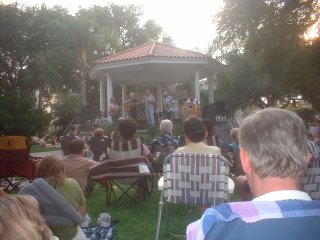 Has anyone heard that the old coquina seawall is in danger of being demolished for a modern seawall? Historian Daid Nolan writes that it WILL be replaced. That would be a shame. We need more info and will inform our gentle readers. We now have 400 subscribers who have walked throug the Plaza within the past six months.
Posted by Karl at 8:32 AM No comments: 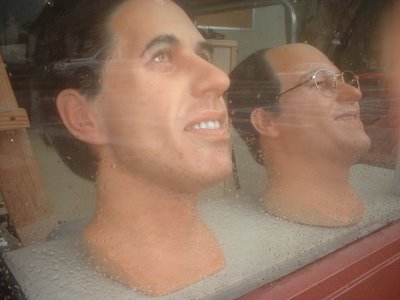 A final note on a conversation held with a local St. Gerge St. merchant who felt that "every dollar spent by a tourist in the low overhead Plaza was a dollar not going to St. George Street businesses". "We have so much invested in rent and need to get every dollar we can to make payroll, replace inventory etc." Perhaps, we say, they should hold this discussion with the landlord who seems to be getting high rents that may not be justified by the gross receipts. There always seems to be another wannabe merchant waiting to gamble that they can succeed where others cannot. The landlord benefits particularly when the lease states that all improvements and fixtures remain after the tenant has left. Bathroom Boutiques? Solar clothing that changes color in the sunlight? Another high end"factory art" gallery? Which one will be the first to go?
Posted by Karl at 7:41 AM No comments: 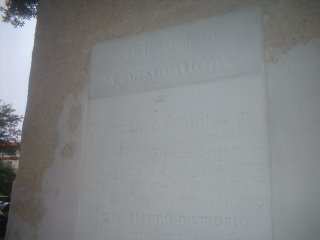 In 1821 St. Augustine became the capital of East Florida with Indian hater Andrew Jackson as governor. If you click onto the photo you can see that the "Constitucion" has been crudely changed to "Constitution." This is done on all four sides. The De La had to remain probably because the rough chisel was not sufficient to change it to "..OF The...". Exactly when it was done we do not know. This could have been done last week for all we know. This could have been the work of Minutemen.
Posted by Karl at 9:05 AM No comments: 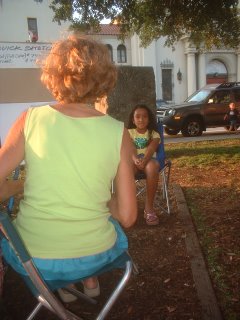 Kate Merrick,the portrait artist, ( she does wonderful linocuts and landscapes as well) keeps busy creating excellent renditions of visitors to the Plaza. Kate will be leaving this month for an extended stay in the Dominican Republic with her daughter, son in law and most importantly...her grandson! We will miss Kate and the Plaza will be lacking one of best. Good luck Kate! Bring back some inspiration. Kate Merrick's website link
Posted by Karl at 8:43 AM No comments: 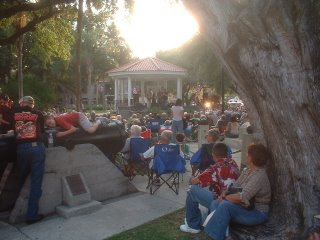 Every Thusday throughout summer, from 7-9 PM, the City sponsors a concert in the Plaza de la Constitucion. Last Thursday the popular local group, the Driftwoods played their smooth and elegant version of Bluegrass both classic ("I'll Fly Away"and contemporary. We were impressed. They were reminiscent of the defunct "Gin Blossoms". Next week get out the ukeleles and slack key guitars because bra there will be da kine Hawaiian style music ! We wanna hear Drop Baby !
Posted by Karl at 8:33 AM No comments: