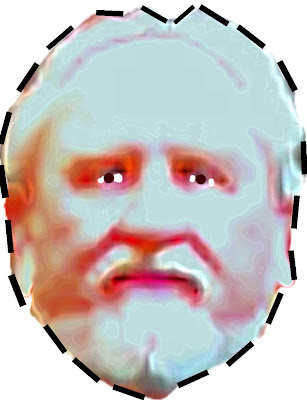 Mayor Boles Cutout Mask !
Click to enlarge full size
Print on Cardstock &tape to paddle or stick
The next time you have something to say at a City Commission meeeting you may want to take this handy item along. We imagine that the mayor would think twice before he throws out an unruly speaker (you) that looks just like his own lordship's visage ! This would be like something from a Phillip K. Dick short story wouldn't it? "Is that Me? If so Who am I?" "Wait a minute, there are four other me's in the room !" We do not want to drive the mayor insane by any means but he is not a champion of free speech and ...hey......stop calling yourself an artist, pal.
Posted by Karl at 3:01 PM 1 comment: 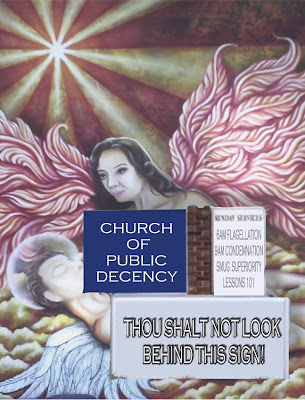 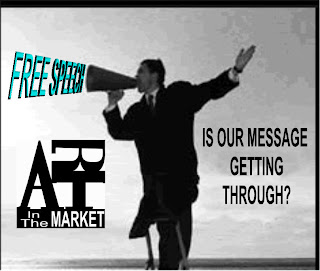 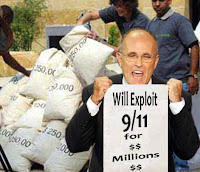 "Freedom is about authority. Freedom is about the willingness of every single human being to cede to lawful authority a great deal of discretion about what you do." Rudolph Guiliani
His quotes are as bad as our own St. Augustine Commissioner's remarks
Posted by Karl at 11:31 AM No comments: 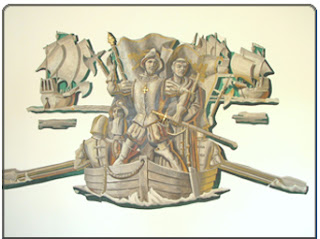 The Hugo Ohlms mural that graced the wall of the Ponce Room at the Ponce Motor Lodge for decades is re-displayed at the St. Augustine and St. Johns County Visitor Information Center.
Story
Posted by Karl at 8:28 PM No comments: 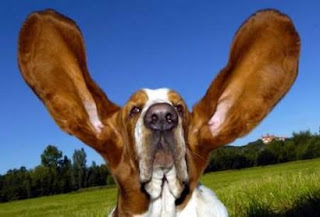 WE HEAR THINGS
"When you are on this street , your ass is mine" ,City Commissioner Errol (Gangsta) Jones to Art In The Market street art vendor who set up in front of the artist's home during the Lincolnville festival.
"We do not want modern art in the Plaza" (De La Constitucion) City Commissioner/architect Don Crichlow.
"You are gettin' pretty chummy with those hippies" WFOY radio personality Al "Foot In Mouth"Brennan to a local arts doyenne talking about an upcoming arts program.
"After looking at some of the art I've seen in the Plaza , I'd rather see sunglasses being sold" Commissioner George Gardener
"I've been to George's house.........all I can say is ...Wal Mart Art. "Local business person in reference to George's above remark.
"You want me to move that stuff or do you want the police to do it?!" Art Association organizer to Art In The Market vendor set up legally near the Arts and Crafts show at Francis Field
"You are stealing electricity .....I'm giving you a two hundred dollar ticket" SAPD police officer to artist who plugged in to an unmarked "city plug" in the plaza
Posted by Karl at 6:59 PM 1 comment:

Big Lies In A Little Town

This is it, and it is repeated over and over again by city commissioners and the public who have been deliberately misinformed

"Judge Tinlin has ordered that we must permit all vendors ( flea market tschotkes, old clothes, jewelry etc.) or none."

This false statement began with the City attorneys Brownchurch and it is taken for gospel with the city commissioners two of which are attorneys.

Arists are now banned from offering their work for sale on publlic property throughout most of St. Augustine

Peruse the court decision (indexed on the right margin) yourself to see if you can find such an order. You will not find it.

"The key-word here is blackwhite. Like so many Newspeak words, this word has two mutually contradictory meanings. Applied to an opponent, it means the habit of impudently claiming that black is white, in contradiction of the plain facts." From George Orwell's novel 1984 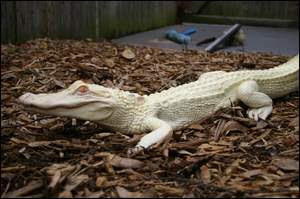 We Didn't Even Know It Was Here
According to a Cajun legend, looking into the eyes of an albino alligator is supposed to give a person good luck for a year. The Alligator Farm here in town has a rare six year old albino gator In March of next year you will have to go to Green Bay Wisconsin to see it. It has been sold to the New Zoo there. We have tried to look at it but it keeps avoiding eye contact. Good bye chalky, snowy,white, achromic reptile without a name. Enjoy Wisconsin.
Posted by Karl at 11:57 AM No comments: 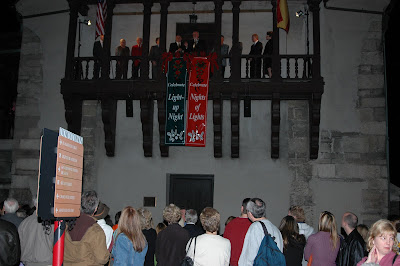 Mayor Joseph Boles and retinue looking out over his dominion on the "Night of Lights"
The City of St. Augustine mayor Joseph Boles may need a good history lesson and a look into the "American "psyche. Thomas Paine wrote the pamphlet Common Sense, which encouraged American independence based on an anti-monarchy argument. Arguing from both a biblical perspective and republican virtues Paine wrote that monarchies were never good for people of any free state. Anything that appears to be elitist or has the trappings of royalty is repellant to many citizens. Following the balcony speeches and the tree lighting, Mayor Boles and his lady took a carriage ride two blocks to the Lightner Museum with an escort of four police cars with lights flashing. A 300 dollar a couple dinner was then ready and the swells were there to raise money for the homeless. Look here mayor and all of you balcony standers, it was probably not your intention to appear grandiose or inflated but that's the way it came off. Save the balcony ceremonies for some foreign dignitary, they like that stuff. Humor 'em. The British Night Watch where the Commissioners play dress up as English governors , that's kinda fun. It's when you start the pretentious crap of taking yourself seriously that we snicker. Take a look at the blonde lady on the lower right in the picture. She's saying "Honey, can you believe these windbags !"
*"castigat ridendo mores " One corrects customs by laughing at them.
Posted by Karl at 4:15 PM No comments: 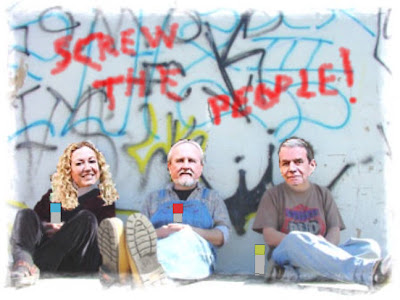 A neurologist in Flagler Hospital, St. Augustine, Florida, USA, a skilled photographer and a profound poet, Dr. Vinod Deshmukh, is someone who holds you mesmerized by his diverse talents. More importantly, he comes across as someone who has the ability to touch your heart and soul both through his words and pictures. Each of the photographs clicked by this doctor, who did his MD degree from B.J. Medical College, Pune and is now settled in Florida, have a story behind them as do the poems he pens so prolifically. Cont'd article from Express India
Posted by Karl at 1:19 PM No comments: