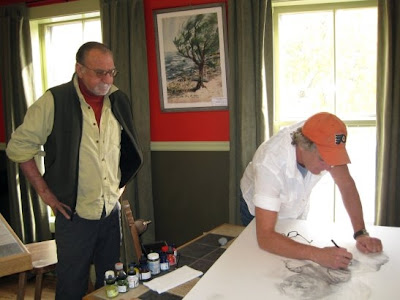 Art In The Market artist and former St. Augustine resident Richard Childs (L) watches while painter Tom Wright (R) works at Spiral Press Cafe in Manchester Vermont. Both artists can be seen regularly creating their art on site at least three days a week during the winter months.


Richard also works outside in the summer months in Saratoga Springs, N.Y. His artwork and sculptures were recently shown at Wampanoag Country Club in West Hartford Connecticut.


Childs says "I truly miss the conviviality and friendship of my fellow artists in St. Augustine. I hope that St. Augustine will one day recognize that artists in public places is a plus for any community."*
Richard's artwork can be viewed here. ArtByRichard.net


* Richard Childs was a successful plaintiff in 2009 with Bates, Childs et al vs City of St. Augustine affirming artist's rights in Federal Court.
Posted by Karl at 3:25 PM No comments: 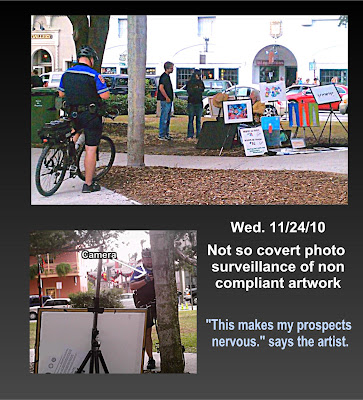 Ordinance 22-6 ,City of St. Augustine﻿.....(prohibited in the Plaza and surrounding streets) "...artistry or the creation of visual art and wares, which includes drawings or paintings applied to paper, cardboard, canvas, cloth or to other similar medium when such art is applied to the medium through the use of brush, pastel, crayon, pencil, spray or other similar object, and the creation, display and/or sale of crafts made by hand or otherwise".
The next day the artist Suvo was again in the Plaza and cited on the above city code violation.
Posted by Karl at 4:13 AM 1 comment: 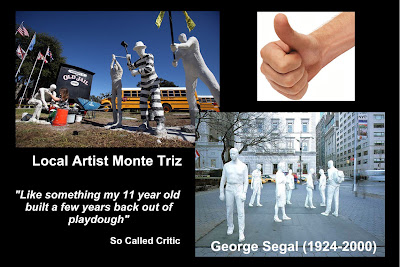 We do not always agree that Ed Swift's Historic Tours of America serves the city with historically accurate narratives and we feel that the "Old Jail" is one of the most prominent tourist traps in our city.
The addition of the Segal inspired contemporary sculptures by Monte Triz in front of the old jail is something that we can say is a positive and interesting addition. The local comments denouncing the works are to be expected in a small Southern community. City Commissioner and architect Don Crichlow said in a past Commission meeting that he did not want to see any "modern art" in St. Augustine.
St. Augustine is not Williamsberg or Jamestown, but a living city and has been for 445 years. The mayor and others want to create a faux Disney atmosphere with pirates (never were here, privateers, yes) and phony architecture. This brings in the dollars, but the gullible public leaves here without a sense of what the history of our town means to the whole scope of European settlement in the New World. Ghosts and pirates stories prevail and Historic Tours of America is guilty of spreading the misconceptions but these artworks are to be applauded as well done.
The hue and cry of the local wags will most likely cause them to be removed even though the installation is on private property. We'll see.
Posted by Karl at 9:31 AM No comments: 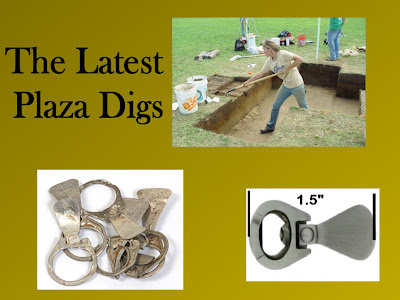 The City of St. Augustine has established a program for aspiring archaeology students. This program gives students aged 16- 20, a hands-on approach to archaeological methods and research. "We do not advise or interfere but leave the research and the dig work entirely in the hands of the students." says Harley Colbirt, city archaeologist "These are bright young people who have already had class room training, so the fieldwork is a way to put their scholastics to work."
What may appear to be a mundane find over on the NW side of the Plaza may be significant according to seventeen year old  Beth Mandeson . "At first we weren't sure what these 'thingies' were but someone said that in the olden days these were called "pull tabs"  or "pop tops"and came off beer and soft drink cans. That made sense".
The student's research indicates that there may be a tie in with these items and the Catholic Church just across the street. The hypothesis is that, while Mass was going on, some husbands loitered over here in the Plaza sipping beer while their families were inside the Cathedral. In the 1960's ,Catholic Mass was still said in Latin and was interminably long .It is difficult to determine whether these six "pull tabs" were the result of one session of beer drinking or six separate incidents.According to research, we can date these aluminum pieces to sometime in the '60's since removable  pull tabs became obsolete sometime in the 70's. "People were swallowing them or cutting themselves with the sharp edges"."We found that out on Wikipedia", said participant Stacy Gurlick of Green Cove Springs.
"What's cool," says Randy Phillippi of Spuds Florida, is that you have history right under your feet here in St. Augustine."" Some dude, older than my grandpa, was just hangin right here with a quaff, while his old lady was in church,and here I am now,standin' here drinkin' a beer."
Anyone interested in this program may call the City of St. Augustine Archeological program at 904- 825-1088
Posted by Karl at 9:56 AM 2 comments:

Old But Not The Oldest

North America
As the City of St. Augustine approaches it's 450th anniversary (in 2015) as the "Oldest City" we must point out, in the interests of accuracy, that it is NOT the oldest permanent European occupied city in North America.
Just as the Genopoly building on St.George Street is amended in it's definition as "The oldest WOODEN schoolhouse" in St. Augustine, we must look more closely. The prevailing thought by hundreds of teachers and students who visit and photograph themselves beside the old clapboards, is that it is the oldest schoolhouse in the nation. Actually it is questionable whether it was ever a schoolhouse. The current and previous owners  (not all ) of the building took broad strokes in it's description to lure in the tourist dollar. It is false history to get the lucre.
As my friends from down Mexico way, who are keenly aware of their own history, remind me they are also from the North American continent and that the "oldest continually occupied  European settlements in North America" are south of  St. Augustine, Florida. They are as follows:
1498 - Santo Domingo, Dominican Republic
1510 - Colon Panama
1510- Guantanamo, Cuba
1515 - Havana , Cuba
1519 - Vera Cruz, Mexico
1519 - Panama City, Panama
1521 - San Juan , Puerto Rico
1524 - Granada, Nicaragua
1550 - Acapulco, Mexico
1563 - Cartago, Costa Rica
1565- St. Augustine, Florida
1610 - Hampton, Virginia
1613- Newport News , Virginia
1614, Albany, NY
1620- Plymouth, MA
1660 - Jersey City, N.J.
* Acoma  Pueblo and Taos Pueblo  New Mexico. The oldest continuously occupied communities in the United States. The Acoma Pueblo today is known as Sky City. Estimated establishment 1000 A.D.
St. Augustine did not become part of the United States until 1821 two hundred and fifty six years after the Spanish established the town. Boundaries are political lines drawn by governments. History shows us that these things change.
North America is unarguably defined as thus: The northern continent of the Western Hemisphere, extending northward from the Colombia-Panama border and including Central America, Mexico, the islands of the Caribbean Sea, the United States, Canada, the Arctic Archipelago, and Greenland. source..Britannica Concise Encyclopedia
If we sound overly definitive here it is because we must drop our myopic ethnocentric concepts that the United States and it's  non Latin ,( i.e. English heritage) can be the peoples who can claim dominion over "The New World" discoveries.
St. Augustine Florida has a long 440 years of history and false history only clouds a clear understanding of the city's significance. Using uunsubstantiated stories of Ponce de Leon and the mythical Fountain of Youth and the embracing of the fake Hollywood pirate stories is frankly deception to lure the "sucker" dollars from unwary tourists. Let's have real history in our old city not fabrications and doublespeak.
New occasions teach new duties;
Time makes ancient good uncouth;
They must upward still, and onward, who would keep abreast of Truth.
James Russell Lowell
Posted by Karl at 9:52 AM No comments: 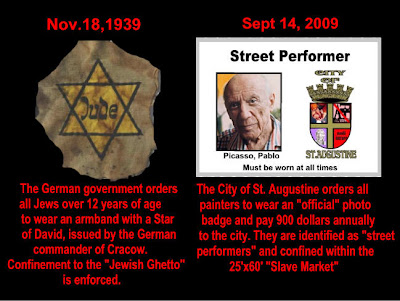 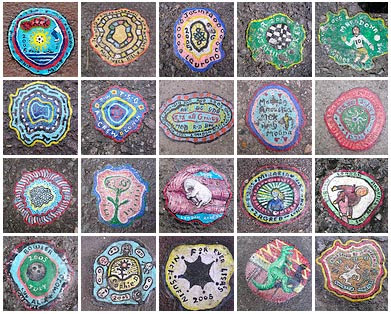 Londoner Ben Wilson has spent time in British jail cells for hitting the streets and recontextualizing the petrified blobs of discarded chewing gum on the sidewalks of old London. His DNA sample was forcibly taken by the bobbies (leading to large public outcry and an eventual change in the law) This happens here in St. Augustine as well.SEE HERE 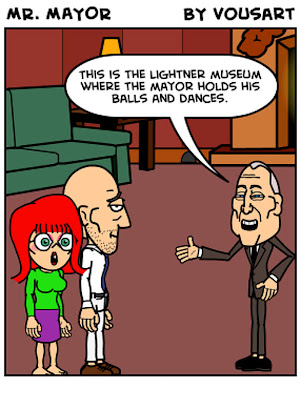