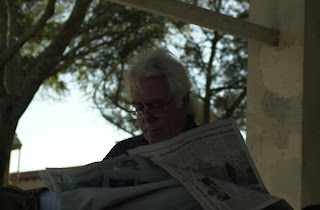 If you've read the previous posts  you know that Karl the rottweiler has died of bone cancer at age 14. Karl was my constant companion during almost all of those years. The grief was real and there is a tangible pain that comes with his absence. Karl was my rock, my hero and I was the same to him. Not to anthropomorphize but my pet Karl had qualities that we would all admire......., a tolerance for all, a sense of calm in a the torrents of life and an appreciation of the simple pleasures. He is sorely missed and always will be.

We both embarked upon journey that started almost five years ago. A post midlife trip for both of us threw us into an unforseen battle with "the Establishment" (to use a sixties term). We didn't seek this fight and the intensity was unexpected. We were jailed (yes, Karl went to the pound and me to County jail) four times and eventually ended up vindicated in Federal Court. I learned that small town politics is the pettiest of all. Naiively I felt that when the facts are proven everyone will agree and proceed on. Not so in the real world, only in the world that I imagined.

It was such a pleasure creating my artworks and taking them out to the public and letting folks take them home to Pennsylvania or even Europe.The money was minimal and I priced everything to make it accessible.
Why else would I spend two years in the Walmart parking lot with Karl? I felt that I could not walk away from a fight that I did not start. I was told,"It's not worth the struggle","Move on". Four years ago the city prosecutor told me that they would fight this through appeals that I couldn't possibly afford financially. I have had a smear campaign accusing me of being a "homeless drunk" to being an ex con convicted of murder.I have experienced our own attorneys successfully winning in court (as we knew they would) collecting a hefty fee,only to abandon us when the court ruling was essentially ignored.The exception is our defense attorney who worked  pro bono to get us out of jail. We are all grateful to St. Augustine attorney Tom Cushman.

At this time the city has lived up to their threat of constant impediments to artists excercising constitutional rights as stated by Federal Courts.Our most ardent activist artists have moved to other more artist friendly communities.The three or four  artists left are removed from their audience corralled into a small space in the Slave Market wearing a photo identifying them as "street performers" paying for illegal permits watching the crowds avoid the area.It is doubtful that anyone will buy permits next month.

If you do not see street painters on your next visit to St. Augustine Florida, you now know why.

Meanwhile I find myself at the age 60 wishing that I had the last five years back.I just wanted people to see and buy my artwork.