MY EYES! MY EYES! 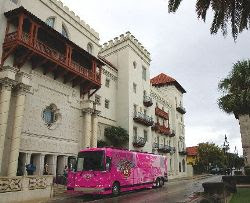 Who wouldn't be excited seeing the VH1 Rock of Love Bus in their town!! It was here last October and Boy! We'll never forget it? Thank you City Relations Manager Paul Williamson for arranging such an event for the Ancient City! One look at that pink bus and you knew that a class act had come to town.
The St. Augustine segment aired the other night and sparks were flying between the girls Ashley and Taya." I see Taya and I want to throw up" says Ashley. We are left wondering if she'd be so upset if it were something Brett related, we think not.Brytania is positive she is going to brawl with Heather and Heather seems to have similar feelings towards the new crop of girls--she hasn't said a word to them and she's already calling them phonies and bitches. As for Brittanya, Heather says "well she's hot," which is super nice seeing that Brittanya tried to punch and spit on her just last week.
We cant wait until the next installment when Brett takes each girl to his pad in the rear of the bus for some "intimate time". He's got to narrow down who the lucky girl will win his hand for a few months. Mom and Dad aren't you proud that your little girl is "on TV!"
The next episode on the road is in Southern Indiana entitled ,"Who's A French Licker?"
Man ,I'm feelin' old and stodgy and a little nauseous after watching this crapola.
Posted by Karl at 8:43 PM