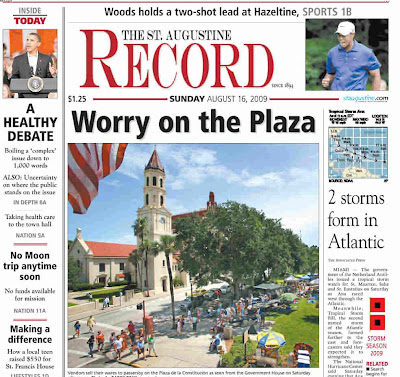 The city has enlisted the local newspaper to spread more confusion before the March 2010 final federal court date by the visual artists vs St. Augustine. These merchandise vendors have recently shown up in the nation's oldest public space.The flea market atmosphere has been fostered and encouraged by the city to , in the words of City planning boss Mark Knight's "build a case". The visual artists, painters, sculptors and photographers are scarceley present amongst the rummage sale. On Saturday when at least 18 vendors were hawking their wares ( hawking....shouting out) there were three painters set up away from the din where there is much less tourist traffic.The vendors arrive at dawn and set up in prime spots. Merchandise vendors, unaware of the freedom of speech nuances in the law say, "We have every right to be here" When asked if they would contribute to our legal defense fund they uniformly look confused and then decline , laughing it off. Not only can you get a blown glass pipe down in the Plaza ,but if you look ok, you can buy the"weed" for which it was intended. Story
Posted by Karl at 4:54 AM