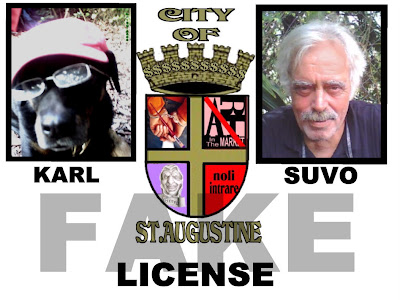 I've never bought a state lottery ticket and I sometimes get irritated standing in line waiting, while the sweet old lady blows fifty dollars of her Social Security money on the latest gimmicky promotion to Easy Street. That said, I'm not about to pay seventy five dollars a month to the City of St. Augustine for a chance to set up my art in the slave market, vying for room next to "Rheumy Eyed Joe" or "Snickers", also known as "Crackboy". These guys have every right to be there and it is unfair of the city using the artists as vigilantes ,evicting the homeless.
I will not cite cases here indicating that First Amendment activities cannot be lotterized and licensing schemes are illegal codes that are clearly prior restraints on first amendment activity. Read enough of these cases like I have and you will just throw up your arms and say , "F@#k it. I'm going to the beach!"
The city licensing office had two applicant artists for the six "performer" spots in the market making the first lottery a non exciting event, being that we know the outcome in advance. I was imagining the City Comptroller, Mark Litzinger regally coming down the steps at the designated time of two Pm and reaching into a large fishbowl held by Barbara. The names on the two slips of paper were posted on the outside door as lottery winners . The "winners" then have three hours to get to City Hall to pay the seventy five dollars and get photographed or forfeit their spot for the month. When asked if a person could call on the phone to see if their name is drawn, Barbara was unsure. It did not seem fair that someone in Jacksonville would have to..........wait a minute! Fair?! What am I thinking? This city administration openly and blatantly violates artist's rights by throwing them in jail and I'm grousing about their unfairness? Criminal behaviour is what they are perpetrating and City Manager Harriss and City attorney Brown know it.
So, I've saved myself seventy five bucks and made my own license (see above). It's every bit as valid as theirs, ..........no...., more so, since I didn't force myself to obtain it . *
By the way, like many businesses nowdays, the art selling business is slack as well. So if you are interested in a license of any sort I'd be willing to issue one to you after you give me a good story as to why you need it. Just a small fee. I can be found in the Plaza.
* I have tax certificates in four states ....artists pay taxes too.
Posted by Karl at 5:54 PM