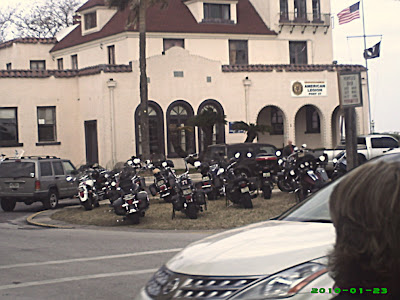 In the City administration's efforts to eliminate artists from the Plaza, they are now advancing their case to the rest of the city contradicting the agreement to make the artist's successful May 2009 injunction permanent.
Tonight at the City Commission meeting ,paid employees will come forward under oath in a faux court like setting (no cross examination allowed) Photos of unregulated merchandise vendor activity will be shown and the City Attorney will say that this is proof that First Amendment activity needs to be restricted or curtailed. There will be scant evidence that any of this will be about visual artists but will show the mostly out of town flea market activity that the city has fostered in order to "make a case" as stated by City planner Mark Knight.
The new ordinance states that Anderson Circle (above) is one of the "prime historic spots in St. Augustine. (Really?) The artists first amendment activity will not be permitted on that spot. An artist may not set up an easel to paint a view of the Tradewinds Bar, the Hamlin Mansion(American Legion) or the bay view or the bridge entryway with the Lions at the entry. This carries a hundred dollar fine and a risk of jail since it will be a criminal infraction.
It seems that parking motorcycles passes muster as an activity permitted. This photo was taken at 3 pm yesterday. A number of police passed both on bicycle and auto ....no problem. What a topsy turvy world we have created in St.Augustine Florida1.
Posted by Karl at 8:42 AM