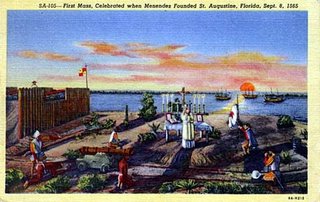 On Saturday ,September 2, the country's oldest city celebrates. In 1565 Pedro Menendez and crew reportedly landed in the area near the present day Fountain of Youth Park and Mission Nombre de Dios. A reenactment and Mass will be held on the church grounds where a simulation of the first altar ( above) is located. Activities will be held throughout the day ending with a Concert in the gazebo at the Plaza De La Constitucion. More

Let's not forget that when Menendez arrived here , Chief Seloy and the Timucuan tribe had an already thriving villageof perhaps 1000 residents. More We are not certain but it has been told that Capitan Menendez and his men began staking out property for themselves and accepted from the natives a lodge house for quarters. It took about a year for relationships to reach a breaking point and the Spaniards resettled across the bay to Anastasia island. This has long been considered the first "gated community" in the nation.

There will be no Native American celebrations during this time.
Posted by Karl at 10:10 AM