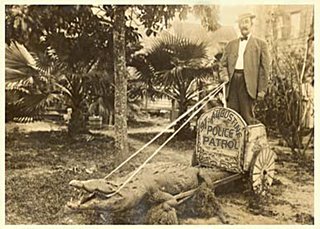 The year was 1914. War in Europe was looming and the St. Augustine tourism boom of the previous decades had cooled with the wealthy heading now to Flagler's mega hotels in Palm Beach and Key West. Solicito"Mike"Salvadore had just purchased a Ur-Leica 35 mm camera, the state of the art technology of the time.

Being a forward thinking businessman ,Mike came up with a promotion to enhance the tourist traffic from the north. "Yankees are fascinated with alligators. Let's get the biggest gator out at the farm and make picture postcards." Carriage maker Daniel Pellicer crafted a special "gator chariot" with materials underwritten by the local police department.

A crowd gathered as the gator was carted to the Plaza De La Constitucion , rigged with a rein his massive tail was placed with under the chariot. Mike wore his Sunday best along with a new straw boater from Mason's. The Ur- Leica had a shutter sound that the gator apparently found annoying because as the shutter went off the gator's tail raised the chariot and Mike almost four feet in the air! The gator named "Farouk" took off toward King Street straight down Aviles Ave. to Ponce's Poultry Market ! Farouk had apparently discovered the source of his daily regimen of three chickens. The crowd ran in terror while a few of the local men ran after Farouk. Who knew how fast a gator could run when in the vicinity of unlimited chickens?!

Other than a few scrapes from falling and a semi demolished front room of the market, there was no serious aftermath. The decision to let Farouk devour most of the chickens on ice and the live ones in the front crates was a good one. Very much sated, Farouk fell into an almost comatose slumber and was loaded and transported back to the farm on Anastasia Island.

Mike got a good picture and was a gentleman about the huge bill presented to him by Mr. Ponce. The postcard proved to be popular and is a collector's item today.
Posted by Karl at 11:30 AM